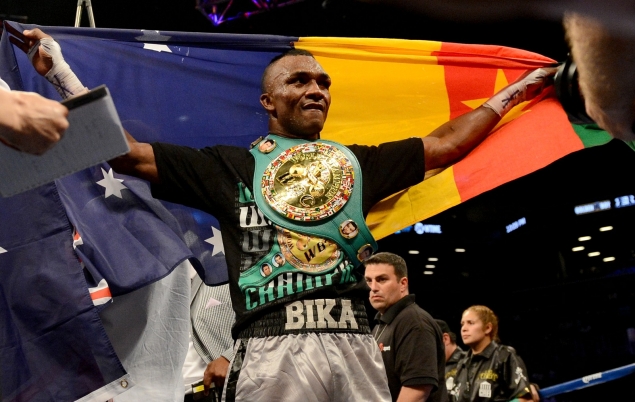 Skills pay the bills, they say, and that is usually the case within the squared circle, as the man with the better array of skills, the more TALENTED boxer, usually wins.

Ah, but there is an exception to every rule, other than death and taxes. And, in fact, the non-payment of taxes is a “skill,” which can sometimes result in a person taking a state-sponsored vacation. So, the only certainty is death…but I digressÔÇª

Sakio Bika is not a smooth, “Skills pay the bills” sort of boxer. His game is one predicated on his strength, will and ruggedness winning out. Yes, the Cameroon-born Australian resident, who gloves up next Saturday, April 4, against RING light heavyweight champion Adonis Stevenson, is not the smoother pugilist with the more vast arsenal when we assess these two boxers.

But there might be an intangible in play here, one which might make a fan consider Bika’s chances with a bit more optimism than one might assume on the surface.

In short, Bika is kinda irked. Maybe more than “kinda,” actually. During a recent conference call to bang the drums for the scrap, which will run on CBS terrestrial (3 p.m. ET), pretty much all queries were aimed at Adonis and had to do with whether or not he’d be fighting WBA/IBF/WBO titlist Sergey Kovalev. I put it to Bika a couple days later: Dude, are you pissed off?

“It angered me,” the 35-year-old rugged-man told me. “I was very, very pissed off. I’ve been in this business a very long time. I’m very focused on my opponent.” Message: I’m a vet; I know how to focus this ire the right way. “I’m going to win. Adonis is not special. I know he has a big right hand. But April 4, we will see.”

Bika comes in without screaming momentum; he won the vacant WBC 168-pound crown against Marco Periban in June 2013, then drew with Anthony Dirrell in his first defense. They did the rematch and the Michiganer Dirrell made off with the strap. At 32-6-3 (21 knockouts), his record doesn’t scream “favorite” and, yes, the writers were sending a message of unintentional disrespect when asking the 25-1 (21 KOs) Adonis, 37, about a Kovalev fight. Also, this fight is in new territory, 175, for the underdog. His lack of power could easily be an even greater drag on him at this weight class.

“Maybe we will see Bika versus Kovalev,” said Bika, in closing, reminding us all of something we should know. The best laid plans of of mice and men – and especially those involved in making longer-range plans in the fight game – often go awry.