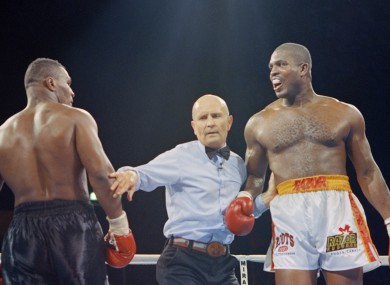 He knows what many – if not most of you – think of his endeavor and he gives not a damn.

He is 51, a good few years beyond how old genial George Foreman was when, at 45, he uplifted the sagging shoulders of 40-something fellas the world over by beating comparative pup Michael Moorer. He gets that his quest, to gain a heavyweight title like Foreman did, draws snickers and much nastier on Twitter.

And Donovan “Razor” Ruddock (38-5-1, 29 knockouts), who fights on Saturday night in his adopted homeland of Canada with his wife of 20 years working his corner, looks past the critique.

Fans of his work back in the day, the ’90s being his prime – hey, like Luke Perry! And Nirvana! – recall a sturdily-built banger. Left hook, nasty hookercut, not much for jabbing or moving. Sometimes the man who debuted as a pro in 1982 left his chin open for testing because he invested so much in the power shot.

The comebacker told me in a phoner a couple days before his scrap against 10-6-1 Raymond Olubowale, himself 44, that he decided to give this dangerous-but-oh-so-addictive game another go when he found himself sitting around with guys a couple years older than him.

“We were on a beach; they were drinking beer and talking about stuff they had done. And I realized, is this what I have to look forward to? To waiting around to die?”

The missus was on board with a ring return, especially after a doc told him eight years ago that his blood pressure and cholesterol were high and diabetes was in line as his next opponent. Ruddock, a Toronto resident who has gone back and forth to his native Jamaica, got tested in the gym by a young gun a couple years back. “He was tough, a badass, about 21. And I schooled him.”

Nope, it’s not to replace lost earnings or rewrite the record book, this quest. “I don’t look back. I want to forge new memories,” he said.

The plan is to win Saturday, then take the Canadian crown. Then beat a top 10 type. Next, handle a Wladimir Klitschko or a Deontay Wilder or whomever. “I have everything,” he declared.

The missus, she’s all in to the point she will work his corner. “I am not worried about him taking punishment because I have seen how hard he’s worked; I have seen the sparring,” she told me. “The ring is his home and anyone else who enters with him is just a visitor.”

I told Ruddock the older I get, the less judgmental I am about graybeards deciding to soldier on past their primes. See, my best research indicates we have but one life to live. If Ruddock is fit to fight and his family is on board, then who the heck am I to opine against it? Ruddock chuckled when I told him Roy Jones Jr. is still a campaigner. Bless him, he said. “I want to educate people that you can still do it, that time and age does not define you.”

The Twitter has a Michael Woods just for you.