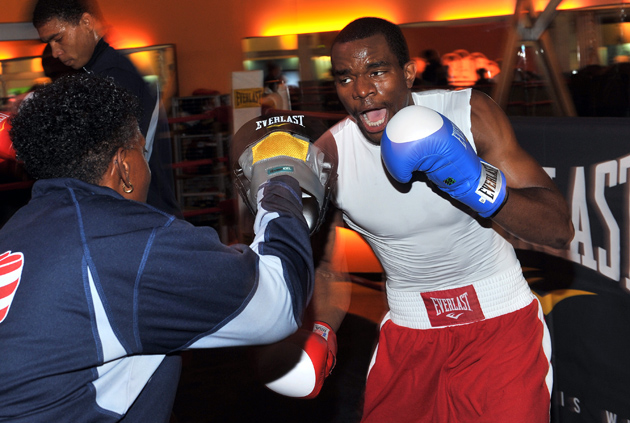 An attractive bout between unbeaten super middleweights will take place on boxing’s biggest stage this year as Jesse Hart is set to fight Mike Jimenez on May 2 at the MGM Grand in Las Vegas, Nev. The 10-round bout will take place on the non-televised portion of the Mayweather Promotions/Top Rank Promotions card that will feature Floyd Mayweather Jr. versus Manny Pacquiao in its main event, Top Rank matchmaker Brad Goodman told RingTV.

In his last bout on Dec. 13, Hart (16-0, 13 KOs) stopped hard-hitting veteran Samuel Miller in the second round. The bout took place in Hart’s hometown of Philadelphia.

Hart, who fought five times in 2014, is one of Top Rank’s prized prospects, while Jimenez (16-0 1 NC, 10 KOs) has fought all of his bouts in and around his hometown of Chicago and in neighboring Indiana. In his last bout on Nov. 29, Jimenez won an eight-round unanimous decision over Rollin Williams.

Before Hart and Jimenez square off on May 2, Jimenez will fight on March 28 against Kevin Engel at the Horseshoe Casino in Hammond, Ind.

Jimenez is promoted by Bobby Hitz.

Francisco A. Salazar has written for RingTV since October of 2013 and has covered boxing in Southern California and abroad since 2000. Salazar also covers boxing for the Ventura County (CA) Star newspaper, Boxingscene.com, and Knockout Nation. He can be reached by email at [email protected] or on Twitter at FSalazarBoxing.