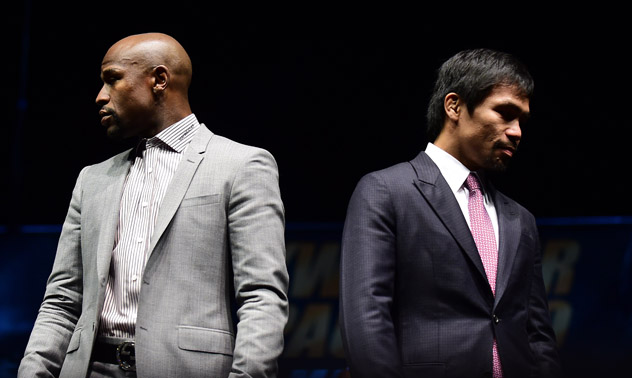 In an ideal world, they would have built the biggest stadium the world has ever seen, with 250,000 seats, to satisfy demand for the Super Bowl of Boxing: the showdown between Floyd “Money” Mayweather Jr. and the Fighting Congressman, Manny Pacquiao.

But this world is not ideal, not near all the time anyway, and thus, the mega-match will be held in the comparatively tiny confines of the MGM Grand on May 2. Demand will be off the hook, unprecedented for a boxing match, and all the more so now with word coming out that only less than 1,000 tickets will be sold to the general public.

Lance Pugmire of the LA Times reported that tickets will go on on sale “by the end of next week” but the scrum for them will be intense, rivaling a Marvelous Marvin Hagler-Thomas Hearns-level intensity. Pugmire said executives told him that “less than 1,000 tickets will be available to the public through Ticketmaster.”

That take will obliterate the gate record set by the desire to see Floyd Mayweather-Canelo Alvarez in 2013; a little over $20 million came into the coffers for that one.

Tickets for the May 2 “Clash for All the Cash” have been divvied up between the host site, Mayweather Promotions and “Pac-Man’s” promoter, Top Rank Promotions. Ticket brokers got the drop on this arrangement, having a degree of certainty that they’d get their hands on a certain number of tickets – and they have been selling tickets they didn’t have possession of for weeks now. Yes, this fight will be something of a paradise for the high-grade scalper.

Not long ago, Top Rank’s Bob Arum grumbled that it made sense to hold this tangle in a football stadium to satisfy demand. But with ticket prices being scaled to this level, it looks like the calculus to keep it in Floyd’s boxing homebase, the MGM, will not prove to be disastrous. Unless, of course, you’re a true-blue boxing fan hoping to actually say you were in the building…the overwhelming majority of their dreams will be kayoed.