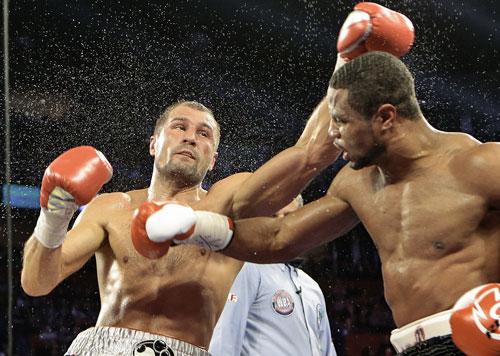 Sergey Kovalev: Kovalev is finding new ways to bolster his reputation. Against Bernard Hopkins in November, the IBF, WBA and WBO light heavyweight titleholder proved that he is far more than a puncher. Against Jean Pascal on Saturday at the Bell Centre in Montreal, he proved that he can stare adversity in the face, beat it down and emerge with another memorable victory that enhances his image as a human wrecking ball. He should thank Jean Pascal, who could’ve rolled over after the third round but bravely decided to turn the fight into a short-lived war he was destined to lose by knockout 1:03 into the eighth round. What might’ve been just another stoppage – albeit against an elite opponent who had never been knocked out – became more compelling because Kovalev had to dig much deeper than usual to have his hand raised in victory. Thus, he undoubtedly added to his reputation as a must-see attraction every time he steps into the ring. The Russian’s next fight – against Nadjib Mohammedi, his mandatory IBF challenger – won’t create the buzz this past one did but everyone will want to watch. The one after that? I don’t know if Kovalev can lure RING and WBC champ Adonis Stevenson into the ring but that’s the light heavyweight fight all fans want to see. If it happens, and Kovalev wins, he would hold all five major belts. Then anyone who wants to vie for a title must go through Kovalev (27-0-1, 24 knockouts). That would ensure that more memorable fights lie ahead for one of the sport’s most compelling figures.

Jean Pascal: This is another case in which the word “loser” really doesn’t apply to the loser of a specific fight. Yes, Pascal was knocked out for the first time in his career before his hometown fans. Brutally so. It wasn’t a good night in that respect. That said, the courage and determination with which he fought undoubtedly earned him renewed respect. Pascal’s ability to bounce back from a near-disastrous third round to give Kovalev a serious test turned an apparent blowout into an entertaining – and, for a short time, competitive – fight. And the fans clearly appreciated it. After the fight, they stood by their man with warm smiles and rousing applause. And they should know that the Jean Pascal we saw against Kovalev might’ve beaten any other light heavyweight in the world, perhaps even local rival Adonis Stevenson. Pascal just happened to be in the ring with an immovable force, one who seems almost unbeatable at the moment. I’d like to see Stevenson fight Kovalev, who is now his mandatory challenger. If he doesn’t, I love a Stevenson-Pascal matchup at the Bell Centre. That would be an enormous, energy-packed fight in Quebec. And it would give Pascal (29-3-1, 17 KOs) a chance for a happier ending. I think he earned that against Kovalev on Saturday.

The Montreal card was hit and miss overall. Some of the non-televised fights were fun to watch, as was the main event. That wasn’t the case with the two fights that preceded Kovalev-Pascal. The fight between Vyacheslav Glazkov (20-0-1, 12 KOs) and Steve Cunningham (28-7, 13 KOs) was painfully boring, as is often the case with two light-punching heavyweights. The only interesting aspect of it was the mildly controversial decision, which went to Glazkov. Some thought Cunningham had won. Glazkov probably will face Wladimir Klitschko next, which won’t be pretty. Maybe Cunningham was fortunate that he came up short. The fight between Issac Chilemba (24-2, 10 KOs) and Vasily Lepikhin (17-1, 9 KOs) also was a snoozer, although at least Chilemba’s refined skills are nice to watch. I think Chilemba, who outpointed Lepikhin, could give any 175-pounder at least some trouble but he has little punching power. That limits him. He would have difficultly beating strong, hard-punching light heavyweights like Kovalev and Stevenson if they’re able to walk through his punches. ÔÇª Dierry Jean (28-1, 20 KOs) impressed me in Montreal. The Haitian-Canadian lightweight, a very personable young man, made the decision recently to give up drinking and gambling so he could get the most out of his boxing career. He’s been sober for more than four months. And the change seemed to be reflected in the ring on the Kovalev-Pascal card, on which he stopped Carlos Manuel Reyes (25-4-1, 17 KOs) with vicious body shots in the third round. Reyes was no great test but Jean, so quick, so athletic, looked very sharp. He believes he’s going to win a 135-pound title. I don’t doubt him. ÔÇª

Mohammedi, the IBF’s No. 1 contender, is next in line to face Kovalev. The Frenchman fights with great spirit, as he demonstrated during his sixth-round stoppage of Lee Campbell (8-2, 4 KOs) on the Kovalev-Pascal card. However, I didn’t see anything that leads me to believe Mohammedi (37-3, 23 KOs) is a serious threat to the champion. ÔÇª Andre Berto (30-3, 23 KOs) recorded his first significant victory since 2011 on Friday, stopping Josesito Lopez (33-7, 19 KOs) in the sixth round at Citizens Bank Arena in Ontario, California, on Spike TV. Berto seemed to show that he can again be a major factor at 147 pounds. ÔÇª On the same card, Shawn Porter (25-1-1, 16 KOs) put away late replacement Erick Bone (16-2, 8 KOs) in five rounds. Porter was fighting for the first time since he lost the IBF welterweight title to Kell Brook in August. ÔÇª Junior lightweight contender Francisco Vargas (22-0-1, 16 KOs) turned in another impressive performance Thursday in San Antonio, stopping Will Tomlinson (23-2-1, 13 KOs) in eight rounds – Vargas’ third straight stoppage. He’s on a roll.