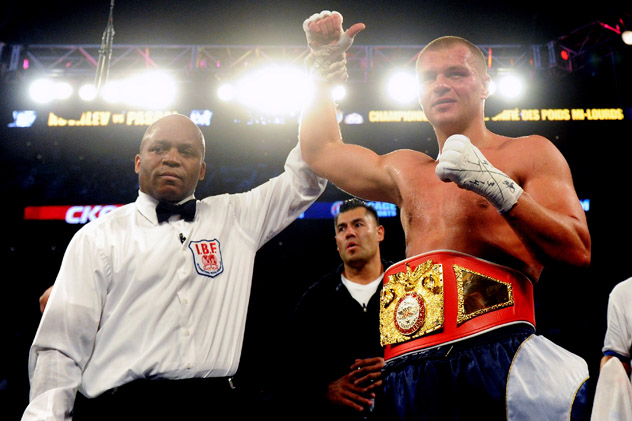 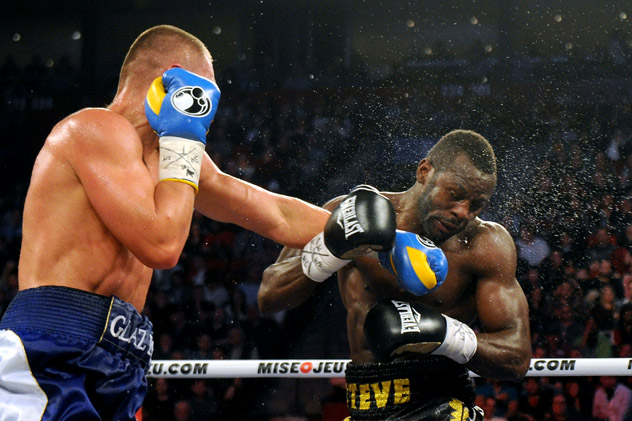 Vyacheslav Glazkov (left) connects with the head of Steve Cunningham during their undercard fight prior to the Sergey Kovalev-Jean Pascal main event at the Bell Centre on March 14 in Montreal, Quebec, Canada. Photo by Richard Wolowicz/Getty Images

A day after fans witnessed two very different heavyweights in Chris Arreola and Curtis Harper slug each other for eight grueling rounds, we had two big men who displayed technical skills, worked behind jabs and used head and feet movement.

Going 12 rounds for just the second time in his career, Glazkov, who won by scores of 116-112 (twice) and 115-113, came on strong in the second half of the fight landing more punches on the inside. Cunningham, a former U.S. Navy sailor, relied too much on his jab in the later rounds and was unable to string together combinations to follow up and stun the Ukranian, who remains undefeated.

Going into the 12th round with the crowd getting restless, Glazkov came out more aggressive, fighting as if he needed the last round to win the fight. Some media members at ringside scored the fight in Cunningham’s favor, believing the former cruiserweight champ won more early rounds.

Chilemba starting asserting his will by Round 3, causing Lepikhin to completely stop throwing punches. Midway through the fight, Lepikhin’s trainer who is also his father threatened to stop the fight if his son did not pick up the action. 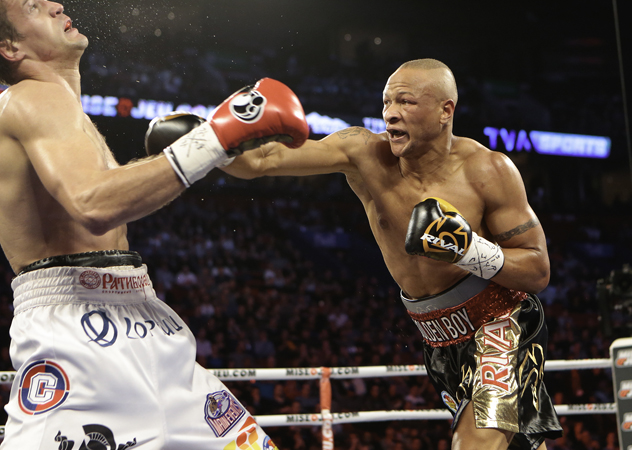 If his father thought he wasn’t throwing enough earlier in the fight, in Round 7 Lepikhin shut down and unbeknownst to anyone in the arena he just laid on the ropes and refused to fight. Chilemba was overly cautious and pawed a few jabs at Lepikhin to see how he would respond. Chilemba allowed Lepikhin to escape the round to a thunderous chorus of boos.

Chilemba displayed a quick, stiff jab to move Lepikhin back onto the ropes and used big uppercuts in the eighth and ninth rounds to stun the Russian fighter.

The crowd cheered loudly after the tenth and final round finally ended only to boo again when Kovalev appeared the large screen getting his hands wrapped.

Chilemba said after the fight he was not surprised by Lepikhin’s style in the ring.

“He did exactly what we expected,” Chilemba said. “We prepared for what he bought. I was patient and I capitalized.”

As for why he thinks Lepikhin stopped fighting, Chilemba offered “I think he ran out of ideas and I wasn’t going to fall for any of his games. I am very pleased with my performance.”

The non-televised bouts on the card were full of action and knockouts starting with the swing bout where rising welterweight prospect David Theroux (6-0, 4 KOs) brought the crowd to its feet with a third-round knockout of Polish fighter Lukasz Janik (12-9-1, 6 KOs).

The Canadian knocked Janik down three times in the third round with a series of debilitating left hooks to the body. After the first knockdown, Janik got up wobbly with blood coming out of his nose but asked to continue. With the crowd chanting his name, Theroux met Janik with another left hook to the body dropping him to his knees again. Somehow Janik was allowed to continue and Theroux started pummeling big shots to the body and head sending Janik down a third time. The referee waived the fight off even before Janik hit the canvas.

Dierry Jean (28-1, 19 KOs) knocked out Carlos Manuel Reyes in the third round with a devastating left hook to the body. The knockout came in 2:48 of the round. Jean knocked down Reyes earlier in the round with a dizzying combination of left hooks and a big right hand uppercut that hurt him badly.

Jean is on a three fight win streak since losing a unanimous decision to IBF 140-pound beltholder Lamont Peterson in January 2014. Jean, hoping this win puts him back in the picture for a title shot, dominating the fight with combinations.

“He was too slow for me,” Jean said after the fight. “I knew he couldn’t handle my right hand and I hurt him bad.”

Light Heavyweight contender Nadjib Mohammedi (38-3, 23 KOs) took another step closer to a title shot after defeating Lee Junior Campbell (8-2-0, 4 KOs) with an impressive sixth-round TKO behind a steady diet of left hooks that had wobbled Campbell several times in the fight. 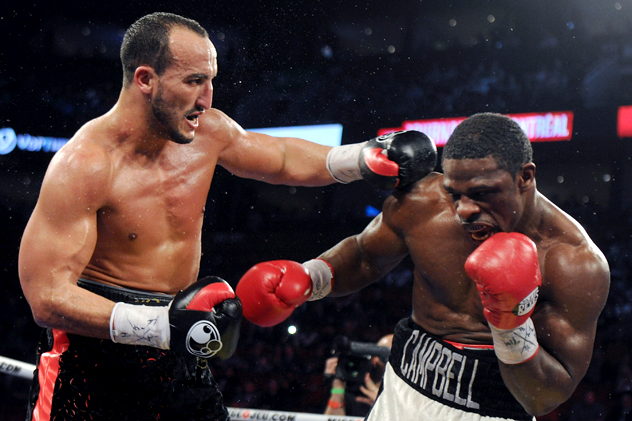 Mohammedi hurt Campbell again in the fifth round pinning him in the corner with flurries of left hooks and uppercuts. In the sixth round Mohammedi landed a crushing left hook to the head which stunned Campbell and sent him back into the ropes. Mohammedi smelling that the end might be near lunged right after him with a flurry of hooks and uppercuts and the referee jumped in to stop the action at 2:38 in the round.

This was Mohammedi’s first training camp with trainer Abel Sanchez and he is now the mandatory challenger for Kovalev.

“I am glad we had a full camp together before we got a bigger fight,” said Sanchez who also trains Gennady Golovkin. “After what I saw tonight he is definitely ready for Kovalev in June.”

Yves Ulysse Junior improves to (6-0, 4 KOs) with a dominating fifth round TKO victory over Miguel Antoine (17-2-1, 9 KOs). Junior punctuated his combinations with a big right hand for which Antoine had no answer for. The stoppage was 2:43.

Junior scored three knockdowns in the fight including one in the fourth round and then another two in the fifth. Antoine managed to get up from the last knockdown but the referee took one look into his eyes quickly stopped the fight.

In the opening bout of the evening Dmitry Mikhaylenko (19-0, 8 KOs) from Gelendzhik, Russia scored a TKO victory over an overmatched Felipe De La Paz (14-4-2, 5 KOs). After succumbing to big left hooks and body shots by Mikhaylenko, De La Paz did not answer the bell for Round 6.