What’s in Sergey Kovalev’s future if he beats Jean Pascal? 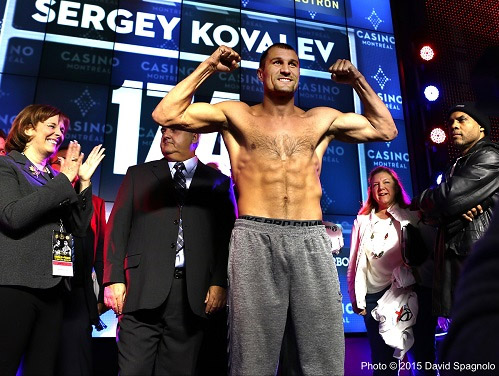 MONTREAL – The future seems to belong to Sergey Kovalev. The question is: What will it look like?

If the IBF, WBA and WBO light heavyweight titleholder from Russia beats Jean Pascal on Saturday in the Bell Centre in Pascal’s hometown, his next fight will be against Nadjib Mohammedi of France, assuming Mohammedi beats Lee Campbell on the Kovalev-Pascal undercard.

After that? Less predictable.

Kovalev wants all four 175-pound sanctioning-body belts, meaning the highest priority would be to fight WBC and RING champ Adonis Stevenson. They seemed to be close to a deal to fight last year but Stevenson decided instead to jump from HBO to Showtime in a failed bid to fight Bernard Hopkins.

The WBC announced that the winner on Saturday will become the mandatory challenger for Stevenson’s belt, although Pascal said today he will not participate in the elimination process. That means Stevenson will have to fight Kovalev (if he beats Pascal) or risk losing his belt. He also could vacate.

And Stevenson told RingTV.com in December that he still wants to fight Kovalev in what would be a very big fight, another reason for optimism. There have been no negotiations, though.

“I haven’t talked to them since (Stevenson promoter) Yvon Michel told me that everything was fine (with the Kovalev-Stevenson fight),” said Kathy Duva, Kovalev’s promoter. “Can It happen? Mayweather-Pacquiao was made. Anything is possible.

“I think Sergey will fight for the WBC title, though. If Stevenson doesn’t want to fight Sergey, the title will be vacated. Then he’ll fight someone else for the title.”

“I had one conversation with them,” Duva said. “I asked whether they were interested in doing it September. They said, ‘He’s going to have a couple more fights first. He’ll be ready around this time next year.’ I said, ‘OK. Tell me when you want to fight.’ That’s where we left it.”

Consider: The relatively slight former cruiserweight champ fought one of the biggest heavyweights in the world – Tyson Fury (who won by KO) – in only his second heavyweight matchup. And Vyacheslav Glazkov, his opponent on the Kovalev-Pascal card, will be his fourth undefeated heavyweight opponent and third in a row.

“It hasn’t been easy,” Richardson said.

Still, Cunningham, 38, is 4-2 in the sport’s heaviest division and in a position to claim the division’s biggest prize – Wladimir Klitschko – if he can get past Glazkov in a title eliminator and Klitschko beats Bryant Jennings on April 25.

Still, as Richardson pointed out, Cunningham wasn’t even a big cruiserweight. The veteran trainer said his fighter, in his cruiserweight days, walked around at around 202, 203 pounds, barely over the weight limit of 200.

So against Glazkov, he’ll once again be at a disadvantage in terms of size. Thus, he can’t plant his feet and exchange punches with the Ukrainian; instead, he’ll have to use all the skills, athleticism and guile he has honed in his 16-year career to emerge victorious.

“He has to be (Guillermo) Rigondeaux in this fight,” Richardson said.

And then, in all liklyhood, Klitschko will await.

NEW MAN: Dierry Jean’s one-sided loss to Lamont Peterson in his first and only title shot in January of last year was the first step in his transformation.

The 32-year old Montreal lightweight fought twice more – knocking out Mario Perez and Daniel Ruiz – and then made a big decision: No more drinking. He checked into the Maison Jean Lapointe rehab center in Montreal for alcohol and gambling addictions and will have been sober for 133 days when he fights Carlos Manuel Reyes (25-3-1, 17 KOs) on the Kovalev-Pascal card.

Jean (27-1, 19 KOs) said he is a different man from the one who fought Peterson. The old Jean, he said, drank in excess and didn’t get proper sleep. He said he knew he’d have to stop Peterson within a few rounds or things could get ugly.

The fact he lost a unanimous decision turned his life around.

“Absolutely,” he said. “If I won that fight, I would still be doing bad things like that. I would’ve thought, ‘I can win being down like that, drinking alcohol, not sleeping, going to the gym with a hangover. That’s over. I’m really curious to see what will happen now that I’m sober.”

The turnaround also improved his relationships.