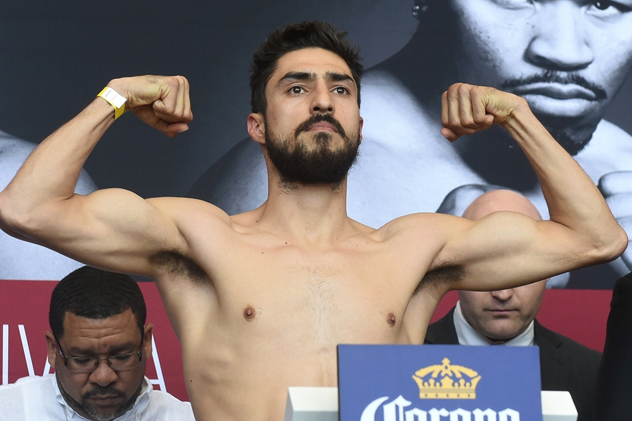 Josesito Lopez has had himself quite a career thus far.

The welterweight fringe contender is known for beating Victor Ortiz in a slugfest a few years ago, and is affectionately known as ‘The Riverside Rocky.’

At the age of 30, Lopez is enjoying the fruits of his labor, in and out of the ring.

But the success he has enjoyed in recent years almost did not happen. Lopez almost gave up on the sport of boxing years ago. He came to the realization though that he would be giving up more on himself than on boxing.

It looks like he has made the right decision to come back. Lopez hopes to continue on his path towards a world title fight but must first get by Andre Berto tonight at the Citizens Business Bank Arena in Ontario, Calif. The bout will headline a ‘Premier Boxing Champions’ card that will be broadcast on SpikeTV, beginning at 9 p.m. ET/ 6 p.m. PT.

In his last bout on Sept. 11, Lopez (33-6, 19 KOs) won a one-sided decision over Rafael Cobos in Las Vegas. The fighter from Riverside, California has won his last three bouts in a row since being stopped by Marcos Maidana in June of 2013.

Whether in victory or defeat, Lopez has had the reputation of fighting with grit and heart. Lopez has gained more popularity throughout the years, whether it was his technical knockout win over Ortiz or his loss to Maidana.

“The support from the people over the last couple of years has been overwhelming,” Lopez told RingTV over phone earlier this week. “I couldn’t have pictured this when I started out in boxing. I’m not the fastest, strongest, or the best fighter. But people know me for what I do in the ring. I give it my all.”

He will have to give it his all against Berto. The former two-time welterweight beltholder has lost three of his last fights but is coming off a win on Sept. 6 over Steve Upsher Chambers. Berto presents a difficult challenge with his athleticism and strength, but Lopez is more driven than ever.

“I don’t remember being this motivated and excited for a fight,” said Lopez, who is co-promoted by Goossen Promotions and Thompson Boxing. “It’s one of those fights where I wish I was a fan watching the fight from a front row seat. You live for these types of fights.”

“I have nothing against Berto. He’s a strong fighter. The difference in the fight is what I can do, not what he does. Stylistically, it’s a great matchup. I trained hard for the fight and I’m focused. I’m a hungry fighter who is willing to do anything to get the win.”

No one will ever question Lopez’s heart in the ring, but there was a point his heart was not in the sport.

Back in April of 2008, Lopez squared off against Edgar Santana in a 10 round bout. Lopez seemed to dominate a majority of the fight, even scoring two knockdowns of Santana, but lost by majority decision.

Lopez left the sport, even pursuing a real estate license. But the itch to fight was too strong for Lopez to ignore and eventually returned to the gym. He returned to the ring over seven months after the Santana fight.

“There were a few times in my career where I was wondering if I was ever good enough. After the Santana fight, I had some depressing moments. I was so close to a win and I didn’t get. It was crushing blow to me and it was tough to get over. I have to admit it was one of the more depressing periods of my life.”

“But then I said to myself that I have to do it. I can’t give up. If I gave up, I would never have seen this (recent success). I’m 30 years and I feel mentally strong. Now I’m more mentally focused and I appreciate those people in my life and fans who have been there since day one.”

His life has mirrored his boxing career and vice versa.

“For the most part, life in general has been a lot like boxing. Being the underdog gives me more confidence. I’m used to it.”