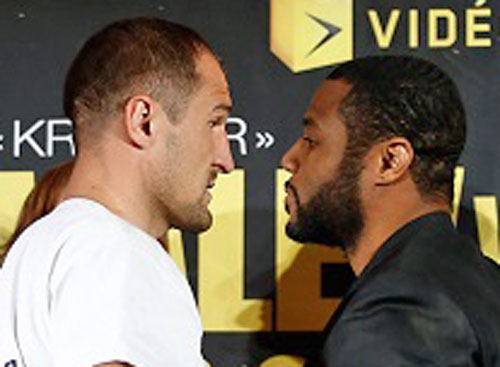 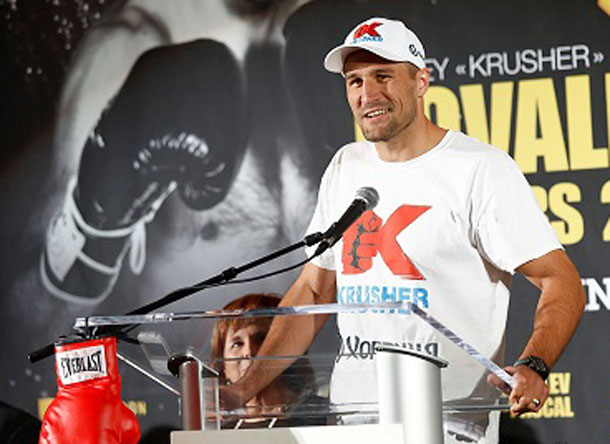 MONTREAL – Sergey Kovalev relishes the memory of watching boxing on TV as a child in his hometown of Chelyabinsk, in Russia, 6,000 miles and two decades removed from his current home in Fort Lauderdale, Florida.

One of the fighters he admired most: Bernard Hopkins. The idea that he would one day share the ring with such a fighter still doesn’t completely register with him.

“I had just started boxing,” said Kovalev, who is scheduled to face Jean Pascal on Saturday at the Bell Centre on HBO. “I watched (Hopkins’) fights with my friends. I would think, ‘Wow! Wow!’ I was excited for his fights. I didn’t think at all I would one day turn pro and fight with Bernard Hopkins ÔÇª and win.

“After this, I understood that dreams come true if you believe in yourself.”

And he insists he’s still dreaming.

Kovalev unified three light heavyweight titles (IBF, WBA and WBO) when the knockout artist beat Hopkins at his own game last November in Atlantic City, patiently outboxing the then-49-year-old master to win a stunning shutout decision and cap a year in which he became THE RING 2014 Fighter of the Year.

He wants more, which obviously would include the two missing pieces of the 175-pound championship puzzle – THE RING and WBC belts held by Adonis Stevenson – and pound-for-pound status.

Naturally, Kovalev is driven to a good extent by economics. He must support his growing family. That includes his first-born son, 5-month-old Aleksandr, whose needs now serve as a powerful motivating factor.

It’s not all about business for Kovalev, though.

“If you have more dreams, you can get more out of boxing,” he said as he admired his Fighter of the Year plaque he received a few minutes earlier. “I can get to a higher level than I am now. That’s why I want to fight the best opponents available. A lot of people ask me, “Why do you fight this guy (Pascal)? You can face an easier opponent.” It’s not for me. I’m fighting for my career, for the history. I’m trying to make boxing interesting because right now not a lot of boxers fight for pride.

“ÔÇª I need to push myself, I need to set more goals. I want to show my baby that you must (set) a goal to achieve a goal. I want to make history for my family. My goal now is to receive this (award) again, be Fighter of the Year for 2015.”

The first obstacle he must overcome is Pascal, the former WBC light heavyweight champ who will be fighting in front of his hometown fans.

Kovalev (26-0-1, 23 knockouts) is favored to win at least in part because of his strong performance against Hopkins, who drew with and then outpointed Pascal in in 2010 and 2011. Russ Amber, one of Pascal’s trainers, believes strongly in his fighter but understands that he’s in the minority. 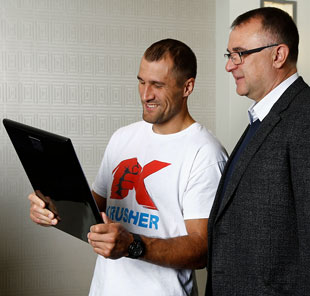 Kovalev holds his Fighter of the Year plaque.

“I’d like to see if any of the major boxing experts, the major media guys, are picking Jean to win,” Amber said at the final press conference Wednesday at Bell Centre. “No one is picking him. Only his fans here give him a chance and that’s more out of loyalty than respect. And that’s OK, not a problem.

“Jean took the fight believing he could win. There will just be a lot of people wrong on Saturday night.”

“He shouldn’t overlook me. He was nothing when I was a world champion,” he said.

John David Jackson, Kovalev’s trainer, has been critical of Pascal leading up to the fight. The former two-division titleholder himself said Pascal is a threat, particularly early in the fight, because of his unorthodox style and punching power but added that the Haitian-Canadian is technically flawed and typically fades after four rounds.

“He’s dangerous right now,” Kovalev said. “He’s always dangerous but right now he’s most dangerous. This is his first fight at this level in Canada in front of his fans [since the Hopkins fights]. And a lot is at stake. There are my three titles and (Pascal’s) WBC ‘diamond’ belt, which isn’t the main title but gives you the opportunity to fight for it.

Kovalev is holding tightly to his dreams.