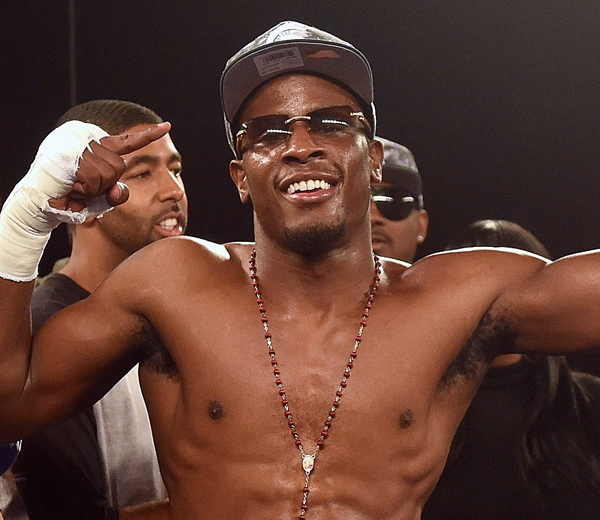 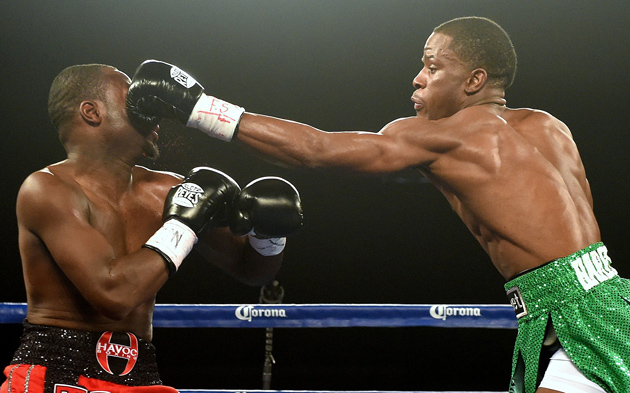 Tony Harrison lands a jab en route to stopping Antwone Smith in the second round of their fight on March 6, 2015 in Las Vegas. Photo by Naoki Fukuda

Las Vegas – Tony “Superbad” Harrison ran his knockout streak to nine with a systematic and brutal dismantling of Antwone Smith that led to a second-round TKO in the main event of ESPN’s “Friday Night Fights” at the Grand Ballroom in the MGM Grand.

Working behind a long jab, Harrison struck early and often as he was clearly determined to dispatch of Smith in spectacular fashion. Well aware that Smith was coming off of a second-round knockout at the hands of Jermall Charlo, the Detroit slugger told RingTV.com that he was determined to one up Charlo by stopping his opponent in less time.

The product of the late Emanuel Steward made good on his promise. In the closing minute of the first frame, Harrison struck with a left jab that he chased with a searing right hand that sank Smith (23-6-1) to the canvas. Harrison was already in the middle of celebrating when somehow Smith made it to his feet, albeit on spaghetti legs. “Superbad” tried has hardest to get rid of Smith but the bell rang and saved his foe from further punishment.

But conclusion as foregone at that point as Harrison went right back to work in the second round and laid into Smith with a bevy of power shots that caused referee Robert Byrd to mercifully call a halt to the fight. For the record, Smith outdid Charlo by 2 minutes and four seconds as the end came 19 seconds into the round.

With the victory, Harrison improves to 20-0 while collecting his 17th knockout.

In the co-featured bout, Ukrainian knockout artist Ievegen Khytrov deposited some rounds in his young career as broke down Jorge Melendez en route to an eighth-round TKO. The unbeaten Khytrov demonstrated a great deal of patience as he punished Melendez with accurate power punching and well-placed body shots. Specifically, a right hand that would come over the top of Melendez’s left. Though game, Melendez was unable to into a rhythm courtesy of the Ukrainian’s game changing punching power. 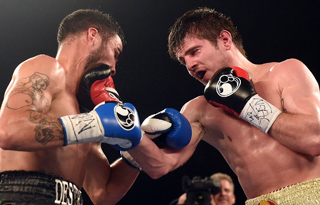 Khytrov upped the ante late in Round 6 as he rocked the Puerto Rican with a combination that was punctuated by a pair of blistering left hands. Melendez would remain upright until the end of the round but it was apparent that knockout #9 was on its way. Round 7 was no better for Melendez as Khytrov ravaged him with body shots and nearly ended his night with crushing hooks upstairs. Although he was allowed to continue, Melendez’ corner had seen enough and waived the white flag with 42 seconds left in Round 8 as Khytrov plowed through him with a series of punches with bad intentions.

Khytrov improves to a perfect 9-0 record while Melendez falls to 28-5-1.

Erickson Lubin wasted little time putting the brakes on previously Kenneth Council’s undefeated streak with a first-round TKO in a scheduled eight-round super welterweight bout. Lubin – who improved to 13-0 (8 knockouts) – dropped the hyperactive Council (8-1) with a right hand in the opening minute. Smelling blood in the water, Lubin demonstrated accuracy and patience as he made every punch count as he secured a second knockdown and followed it with a barrage of punches that forced referee Russell Mora to call a halt to the fight at the 1:33 mark.

Caleb Plant scored a wicked first-round TKO against Daniel Henry in a scheduled six round middleweight bout. After scoring an early knockdown, Plant (6-0, 5 KOs) loaded up and landed a series of savage power shots that left Henry’s equilibrium a wreck. The fight could have been stopped then, but referee Jay Nady unnecessarily allowed the fight to carry on as Plant plowed his opponent with three more punches that sent Henry (2-3-3) crashing to the mat in an unconscious heap at the 2:29 mark.

In bantamweight action 2008 U.S. Olympian Rau’shee Warren needed only 52 seconds to dispatch of Javier Gallo (21-11-1) and improve to 13-0 while collecting his fourth knockout.

Fellow Mike Stafford product Jamel Herring cruised to a unanimous decision victory over Hector Marengo in an 8-round lightweight bout. Herring (11-1) found little threat in Marengo (7-9-4) and easily outclassed him over the course of fight and scored a knockdown in the first round. Scores were 80-71, 80-71 and 80-72.

Kevin Newman dominated Shariff Johnson to earn his first win in a four-round middleweight showdown. Scores were 40-36, 40-36 and 40-35.