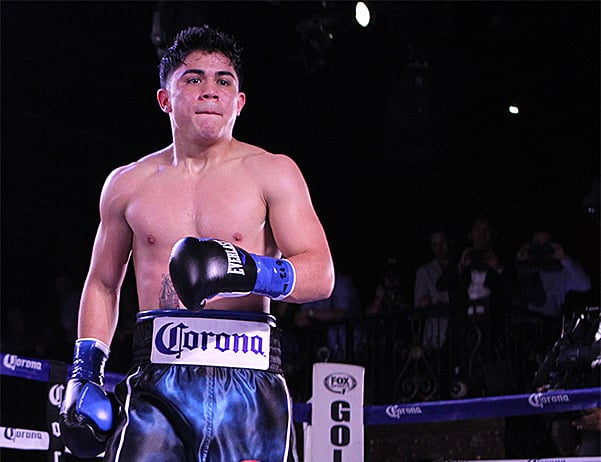 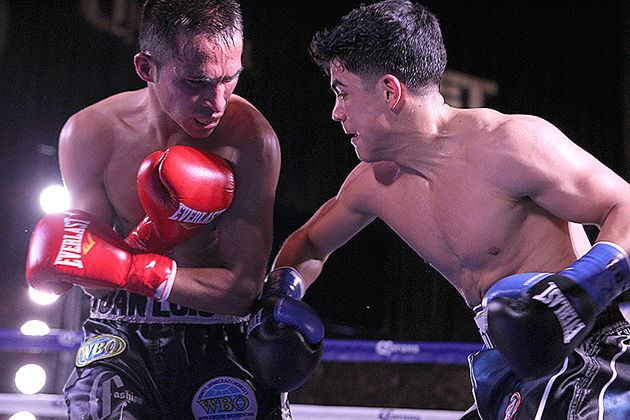 LOS ANGELES – Joseph Diaz Jr. did exactly what he had hoped to do in the main event of the first L.A. Fight Club card on Friday at the Belasco Theater: Put on a show for about 1,000 hometown fans.

Diaz attacked Juan Luis Hernandez with measured ferocity from the opening bell, landing explosive, accurate punches to the face and body of his overmatched Mexican opponent. The punches to the head were eye catching but the blows to the body were the ones that did damage. Hernandez had to take a knee three times – once in the second, twice in the third – because of the pain before the final body blow ended his night.

The fighters were engaged in a furious exchange at the bell to end Round 3 when one more brutal body shot found Hernandez belly and sent him crashing to the canvas in pain.

Referee Jack Reiss said the shot landed just after the bell but was an accidental foul that came in the heat of battle. Hernandez, who lay on his back for several minutes, refused to continue and the result was ruled a TKO victory for Diaz.

“It was impossible for (Diaz) to stop. It was like a chain saw at that moment,” Reiss said.

Diaz (15-0, 10 knockouts) couldn’t have been more pleased. He has become accustomed to winning handily but not in front of his hometown fans and not on national TV. The card was televised on Fox Sports 1.

“My strategy was to cut off the ring and break the guy down with some body shots,” said Diaz, who is from nearby South El Monte. “I knew the guy was a good boxer. I’ve seen some fights with my father that he likes to box around, he likes to get his angles, he likes to dictate the pace. But me and my father had a game plan to cut off the ring and for us to dictate the pace and that’s what I did. I executed my game plan very well and I ended up taking him out with body shots. The guy couldn’t handle my body shots.

“It feels great to keep my undefeated fight status here at home. I had a lot of fight fans here.”

In preliminary bouts, lightweight prospect Christian Gonzalez recorded his ninth knockout in as many fights but probably didn’t expect to get it done this way.

The L.A. fighter was knocked down in the second and stunned early in the third but took over from there, pounding a game Julio Cesar Sarinana (3-3-1) of Phoenix until the ring doctor ordered the fight stopped at 2:02 of the sixth and final round.

Sarinana’s right eye was swollen shut beginning in the third round. That finally prompted the doctor to end matters.

Carlos Morales (7-1-3, 2 KOs) survived a cut above his right eye – the result of a head butt – to defeat Santiago Guevara (8-1, 3 KOs) by a majority decision in a six-round junior lightweight bout between two Los Angeles residents.

Morales outboxed the previously unbeaten Guevara, using a sharp jab and quick feet to control the action for most of the fight. Morales’ loss and three draws all came in his first four fights.