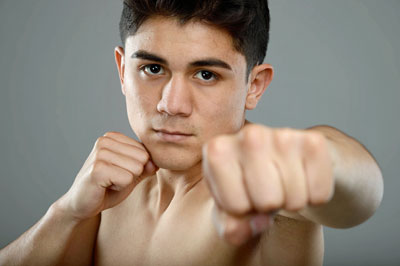 Diaz (15-0, 10 knockouts) forced Hernandez (17-5-1, 9 KOs) to take a knee three times as a result of vicious body shots and then stopped him with one more, which came a split second after the bell to end Round 3.

Diaz attacked with measured ferocity from the opening bell, landing explosive, accurate punches to the face and body of his Mexican opponent. The punches to the head were eye catching but the blows to the body were the ones that did damage. It was easy to tell that they caused Hernandez great pain, so much so that he took a knee in the second and did the same twice more in the third to avoid further punishment.

Diaz evidently was throwing the final body shot as the bell sounded. It found its mark again, leaving Hernandez writhing in pain on the canvas and unable to continue. He lay on his back there for several minutes.

The result was ruled a technical knockout.