Joseph Diaz Jr.: ‘I want to establish my own legacy’ 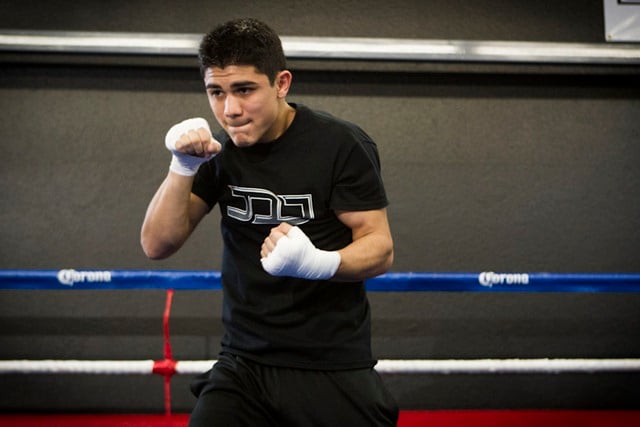 Could you name a fighter who is Mexican-American, was a United States Olympian and grew up in the Los Angeles area? The obvious answer could be Oscar De La Hoya, who went on to win a gold medal in the 1992 Olympics, along with winning multiple world titles after growing up in East LA.

Other than the “Golden Boy,” there is another fighter who fits those parameters. Joseph Diaz Jr. (14-0, 9 knockouts) may not be globally well-known to all fight fans like De La Hoya and while De La Hoya won multiple titles, some fans wonder whether Diaz is capable of winning even one.

But that is OK, according to Diaz. The 22-year-old wants to carve his own path of success in the pro ranks. While De La Hoya has given him high praise for his accomplishments in the ring, Diaz is working hard to surpass those lofty goals and expectations.

Diaz will fight Juan Luis Hernandez this Friday night in a 10-round bout at the Belasco Theatre in Los Angeles. The bout will headline the inaugural ‘LA Fight Club” card, presented by Golden Boy Promotions.

In his last bout on Dec. 8, Diaz won a one-sided, 10-round unanimous decision over Jose Angel Beranza in San Antonio. After mostly fighting away from his home of Downey, a suburb of Los Angeles, Diaz will enjoy fighting before an abundant amount of family and friends.

“To think that I will be fighting 20 minutes from my house and to headline the ‘LA Fight Club’ card is a dream come true,” Diaz told RingTV.com over the phone on Monday. “It was exciting to fight in front of great fans in Texas or at the MGM Grand [in Las Vegas]. But it’s better to fight at home, where I could showcase my skills.”

He will now face Hernandez, who will be fighting for the first time in the United States. In his last bout on Feb. 7, Hernandez, who resides in Tijuana, Mexico, lost a 12-round, unanimous decision to Genesis Servania.

Despite Hernandez (17-4-1, 9 KOs) having split his last two bouts, Diaz is not overlooking him.

“Hernandez has a good record and fought [Servania] the distance. He’s a good little fighter, good little boxer. He can counter. My father and I have come up with a game place and we plan to execute it very well [on Friday night].”

Diaz has made a successful transition from the amateurs into the pro ranks. He has improved with each fight, whether he is shortening up his punches or improving his ring generalship.

Diaz has demonstrated he could stand in the pocket and trade, as was evident in his 10-round, unanimous decision win over Ramiro Robles last July. But Diaz has also demonstrated he can set up his punches, eventually breaking them down as he did against Raul Hidalgo on Sept. 29.

De La Hoya sang high praises of Diaz on a “Golden Boy Live!” broadcast last Friday night, even stating Diaz will fight stronger opposition and possibly fight for a world title. Some are skeptical of those claims or whether Diaz can reach that pinnacle. But Diaz remains driven, undaunted by what is said of him. In fact, cynics motivate him to work that much harder in the gym.

“It’s a blessing for Oscar to say those things about me. I’m glad I have people that recognize that I’m getting better and developing. I want to stay as active as possible and I want to fight the best opposition. I do want the tougher opponents.”

“I do hear the criticisms as well but I’m creating my own path. I want to establish my own legacy, in and out of the ring. And that means continuing to stay focused, absorb as much experience, keep improving, and motivating myself.”

Diaz envisions fighting for a world title sometime next year, which is not out of the question as long as he continues his winning ways. As long as he keeps following his game plan of success, Diaz will not just win a world title but he will achieve that legacy he set out for himself.

“Staying humble and working hard. As long as I keep doing that, I will have built the legacy I have wanted.”