Leave the hand-picking to others, says John Molina: ‘Fighters fight’ 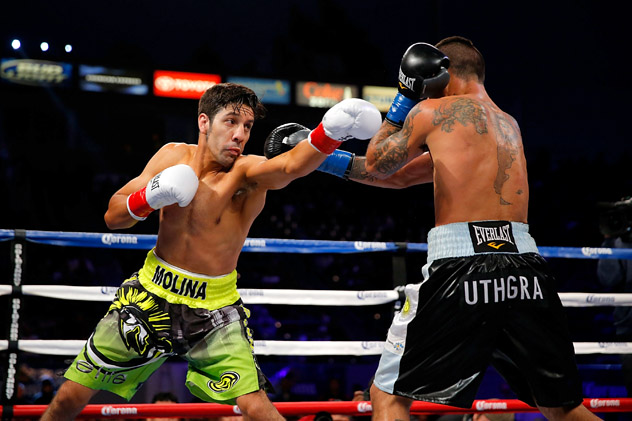 John Molina (L) lunges at Lucas Matthysse on April 26, 2014, during what would be named THE RING Magazine’s Fight of the Year. Both fighters went down twice before Molina was stopped in the 10th round. Photo by Joe Scarnici/Getty Images.

John Molina knows why he was selected to face Adrien Broner in the co-main event of “Premier Boxing Champions'” debut show on NBC this weekend. For the inaugural event, Al Haymon wanted to ensure there would be fireworks and what better way to deliver than to put the polarizing Broner in the ring with the blue-collar worker who has always brought the fight?

“As soon as this fight was brought to my attention I said, ‘Where do I sign?'” Molina told RingTV about how his showdown with the former three-division world champion came about. “I’m not one of these guys that sits there and hand-picks his opponents. I’m the guy that says, ‘Line them up and I’ll fight them all.'”

That’s what has made Molina so endearing to fight fans. Molina may not have the best record in the business at 27-5 (22 knockouts) and he may be viewed as a huge underdog against the talented Broner (29-1, 22 KOs), but if Molina is going to go down, he’ll go down swinging. For the uninitiated, Molina turned heads after being dominated by Mickey Bey for just about every minute of every round back in 2013 only to shock the boxing world with a thrilling 10th-round TKO. Against Lucas Matthysse last April, the duo set the StubHub Center on fire with a barnburner that Molina ended up losing by 11th-round knockout. Fans knew from that point that Molina was must-see TV.

“I think my career is based off of those fights and the fans gravitate toward me because of how I fight,” Molina explained of the two fights that have helped turn him into a fan favorite. His approach to every fight has very little to do with safety and cruising to a victory off of points. Instead, Molina is here to fight rather than simply box. Not that the 5-foot-11 junior welterweight can’t box, it’s just that he chooses to suck his opponents into a dogfight. He admittedly might not be the most athletically gifted fighter around, but you’ll be hard pressed to find another boxer with a heart bigger than his. 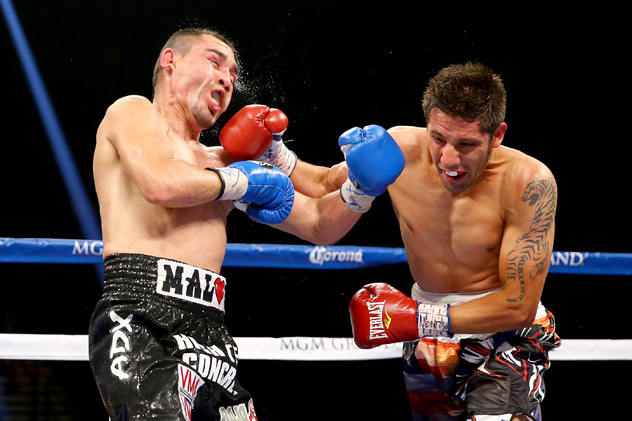 “I fight for the everyday man,” Molina said while also citing how he is thankful that he can make a living as a boxer and will never take it for granted. “I am a provider for my family and that’s why my heart comes through in every fight that I’m in.”

It’s that mentality that has separated Molina from other fighters and has landed him in prime position to take out the popular and controversial Broner and thrust his name into the upper echelon of the sport. Molina went so far as to call Broner his “lottery ticket that he has to cash in.”

There has been talk that Broner may find difficulty with a pressure-fighter like Molina. The last time Broner was in the ring with a hard-hitting pressure-fighter, Marcos Maidana scored the biggest victory of his career and punched his ticket to two fights with Floyd Mayweather Jr. But Molina doesn’t believe that Broner will be the same fighter he was against the Argentine.

“You are kind of fooling yourself if you think you can bank on what one man did to another man if you haven’t been in the ring with him before,” Molina said. “There are definitely things you can gain, like his mannerisms and how he conducted himself under that kind of pressure. But we have a game plan and plan on implementing it on March 7.”

When asked about Broner’s last two fights since the Maidana loss, Molina says that he certainly saw a few things he could take advantage of. But, perhaps more importantly, he figures that he’ll be able to touch Broner with more than “The Problem” has been touched with in the previous 24 rounds.

“I’m definitely not Emmanuel Taylor or Carlos Molina,” Molina said. “Not to take anything away from them. They don’t have the pop that I have. I don’t think he will be too willing to engage in this fight as he was with them.”

Regardless of whether Broner’s ego gets the best of him and he engages in a firefight or if he opts to dance away from Molina’s power, Molina believes he’s going to take Broner out of his comfort zone and deliver 12 rounds of warfare.

Whatever happens after that is anyone’s guess. But one thing is for sure, Molina isn’t looking to be “Mr. NBC,” “Mr. HBO” or “Mr. Entertainment.” He’s a fighter and that’s all that matters.

“Fighters fight, whether it be in a backyard or on any network,” Molina said when asked if he wants to make NBC his new home. “I’m not going to change my name to Mr. HBO or Mr. Showtime or Mr. NBC, it’s not about that. It’s about going out there and fighting. I don’t train to be ‘Mr.’ anything. A fighter is what I am and that’s why people gravitate towards me.”