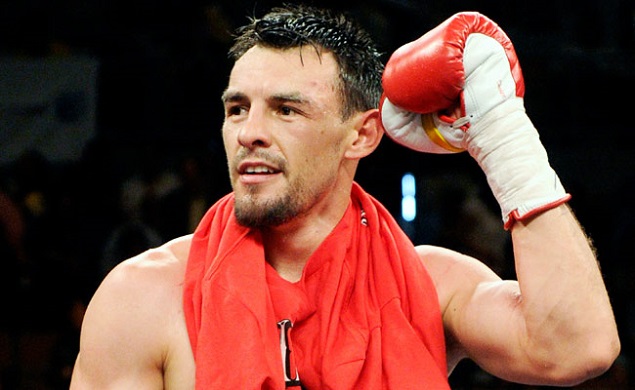 This Saturday marks NBC’s return to boxing as its maiden “Premier Boxing Champions” broadcast will be headlined by an interesting welterweight bout between Keith Thurman and Robert Guerrero.

Guerrero (32-2-1, 18 knockouts) is very aware of what he faces when he meets Thurman at the MGM Grand in Las Vegas.

“Keith Thurman is a great fighter,” a respectful Guerrero said at the press conference in New York announcing the fight. “He’s quick on his feet, quick with his hands. He has power. You got to respect that.”

The former two-division titlist, at featherweight and junior lightweight, is excited to be a part of Al Haymon’s new venture.

“Al Haymon is brilliant for bringing boxing back to network television, especially on NBC, who just broadcasted the Super Bowl,” the southpaw boxer/puncher told RingTV.com. “It doesn’t get any bigger than that. Boxing will once again become one of the most watched sports, just like the old days. I can’t wait to get in there and mix it up for the fans.”

Anson Wainwright – What are your thoughts on facing Keith Thurman?

Robert Guerrero – It’s going to be a great fight, one the fans will remember for years to come.

AW – When you break Thurman down as a fighter, what do you see as his strengths and weaknesses?

RG – His strength is definitely in his power. Thurman has a high knockout ratio and he’s the naturally bigger man, who’s never fought under 147-pounds. I’m not going to talk about his weaknesses because that’s confidential information. I will be testing his chin though; that you can count on.

AW – In your last fight, you outpointed Yoshihiro Kamegai. It was an exciting fight but one in which you got hit more than we’re accustomed to seeing. Why was that?

RG – Kamegai is a pressure fighter and sometimes in this sport, you’re going to get hit. It just comes with the territory. It’s not like I’m going into a fight wanting to get hit but sometimes the fight goes that way. I like to fight toe-to-toe and give the fans their money’s worth. It will be more of the same against Thurman. There will be a lot of action.

AW – Do you feel you’ll have to improve on the Kamegai performance to beat Thurman?

RG – No, because I won and that’s all that matters.

AW – It will have been nine months since your last fight. Why have you been on the sidelines for so long?

RG – No reason, just waiting for the right fight. I plan on fighting more this year. We’ll see what the future holds.

AW – Your 32nd birthday is a couple of weeks after the Thurman fight. Do you still feel like you’re in your prime?

RG – Yes, I still feel I have a lot of fight left in me. I’ll be around for many years to come.

RG – The ultimate goal is to one day be blessed enough in my career to make it to the Hall of Fame. That would be an honor.

AW – What are your thoughts on the welterweight division?

RG – The welterweight division is the hottest most lucrative division in boxing. There are so many big fights to be made and I want to fight the best. If you’re the champion, that’s all that matters. I’m trying to become one on March 7th. It starts with Thurman who is the WBA [interim] champion. [Editor’s note: THE RING does not recognize “interim” or “regular” titlists as dictated by the four major sanctioning bodies. RING welterweight champion Floyd Mayweather Jr. currently holds the WBA title.]

AW – What are your thoughts on the top rated welterweight rated by RING magazine?

8 – Me: Determined and relentless

AW – How are things now with your family?

RG – Everything is great. I thank my Lord and Savior, Jesus Christ for all his blessings. Life is good.

AW – In closing, do you have a message for Thurman?

RG – Bring your lunch pail and hard hat because we are going to work!