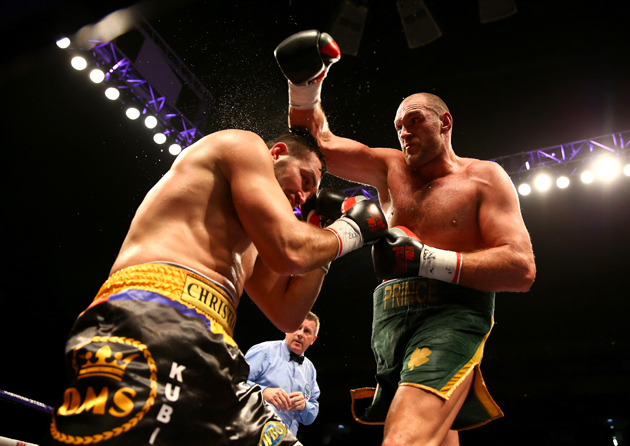 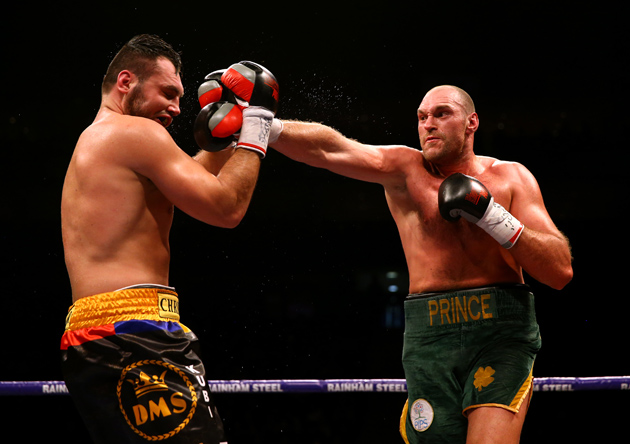 There was a time not long ago when the name Tyson Fury was prefixed by terms like ‘vulnerable’, ‘reckless’, ‘unruly’ and ‘uncoordinated’. World title aspirations were mocked and his ring moniker – okay, his actual name – seemed as comical as his ring entrances, grand boasts and his penchant for a post-fight sing-song. Frankly, he wasn’t taken seriously.

That has altered in recent times, though, and his measured eighth-round stoppage of Christian Hammer adds further credence to the idea that Fury is now one of the very best heavyweights in the world. Better than that, he’s no longer any of the things previously mentioned. He’s calm where he was once reckless, he’s sturdy where he was once vulnerable and he’s disciplined where he was once unruly. In short, Tyson Fury is a changed man. And a far better heavyweight as a result.

Saturday evening’s whitewash at London’s O2 Arena served as a so-called tune-up ahead of a projected world heavyweight title shot against either Wladimir Klitschko or new WBC king Deontay Wilder; Fury is currently mandatory challenger for Klitschko’s WBO world title and, given his recent run of results and all-round entertainment value, is as deserving of a shot as anybody right now. Whether he gets his chance remains to be seen, of course, but he did everything required against Hammer through eight thoroughly one-sided rounds.

For the most part, the London crowd were treated to a lot of the new Fury; the languid, long and economical box-puncher who relies heavily on a jab, thrown snappily from either stance, and a steady stream of follow-up shots, either to head or body. This Fury is more patient than the one we once knew. He takes his time, he sizes up his man, he quells his desire for a fist-fight and instead thinks his way around the ring, strategically, brains over brawn. He is also improved defensively and catches far less clean than he used to.

This all leads to composure and a general sense of calm. The whole picture, it seems, now slows down a tad when Fury is in the ring. Instead of blindly walking into trouble, he sees the shots coming. He evades them, he rides them, he controls his man inside his whopping 85-inch reach. Dare I say it, pages from the Klitschko textbook have been torn and then skim-read. Perhaps even studied.

Hammer (17-4, 10 knockouts) would certainly have been surprised by the ease with which Fury was able to pick him apart from range and then quickly tie him up whenever he attempted to hustle in close. Time and time again he found himself locked up, controlled, spun around and then pushed away. Fury, meanwhile, a smile etched across his expressive face, would drop his hands, shake his shoulders, wiggle his hips, and then get back to pot-shotting behind a surprisingly quick jab.

Fury, of course, did all of this while seamlessly switching stances – orthodox to southpaw and then back again – just as he did so brilliantly against Dereck Chisora last November. This left Hammer in a daze, unsure from which hand his opponent was likely to punch, and pretty soon he was marked up and unable to close the distance.

In the fifth round, however, Fury changed it up some more. He quit being so technical and instead focused on producing a brief cameo of the old Tyson. You know, the one who’d step to opponents, engage them in an old-fashioned brawl and then swing away to the soundtrack of bloodthirsty fans. Inevitably, he’d catch one or two shots coming back the other way, but, on the whole, this approach normally got the job done. He’d use his 18-stone frame to overpower the opposition. He’d punch when they wanted to rest. He’d work them over.

And so it proved with Hammer. Unable to match Fury punch for punch, the Romanian found himself continually backed up and then knocked down by a swift and sneaky right hand in close. The shot was well-picked and clever. Fury moved his man on to it the way a seasoned veteran might.

Still, despite the breakthrough success in round five, the Englishman appeared in no rush to close the show. He knew what was at stake. He realised one error, one slip-up, one moment of accidental comedy could sabotage any potential world title shot. So he continued to chip away at the resilient but limited Hammer and stuck well within the stingy guidelines issued by his impressive trainer Peter Fury. Emphasis on basic boxing and movement, Fury exhibited footwork and punch-picking typically foreign to men his size.

This was Fury’s 24th consecutive win and, though far from his most exciting, and far from his biggest scalp, it was a continuation of the good work he produced last year against Chisora. It was a reminder that there’s more to the charismatic 26-year-old than the silly soundbites, the sillier singing and the general goofiness. Rather, when you get down to it, he’s a six-foot-nine, eighteen-stone behemoth with an uncanny ability to switch stances and remain balanced and effective. He can fight going forward and he can fight going backward. He can box, he can brawl.

All in all, Fury 2.0 is a sobering thought for a heavyweight division mostly comprising smaller men, weaker men, lazier men and men who have forgotten all about personality. Tyson Fury, though, is proof that personality goes a long way. Skills go even further. He appears to have them, too.