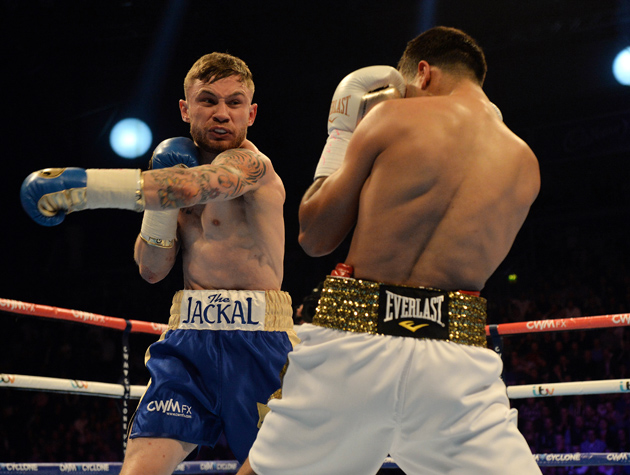 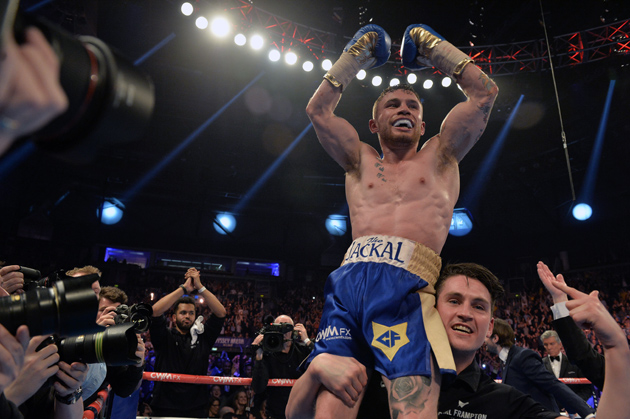 BELFAST – A turbo charged home support cheered on unbeaten local hero Carl Frampton as he successfully defended his IBF junior featherweight title for the first time with a fifth-round technical knockout over Chris Avalos on Saturday.

Frampton, rated No. 1 by THE RING at 122 pounds, landed a terrific right in the fifth and a sharp follow up sent Avalos on his merry way. The challenger was wrestled to the ground and got up gamely but a series of jolting single shots prompted the referee’s timely intervention.

Avalos (25-3, 19 knockouts) had mouthed off at ring center during the referee’s instructions but it was his final moment of bravado.

Following a cautious opening, the first moment of drama occurred in the second when Frampton broke roughly from a clinch and the challenger, clearly distressed, intimated that he’d had his arm twisted.

Frampton did exactly what he’s trained to do and pounced on his prey with a powerful burst and the bell sounded with the home crowd in uproar.

Avalos recovered sufficiently and there was plenty of trench warfare but Frampton continually got the best of it. Nifty counter punches found their mark on the inside, although the defending champion did sustain a minor cut over his right eye while bloodying the mouth of Avalos.

As the fight progressed one sensed that the pace and punishment was taking a toll on the cocky American. Frampton was catching the odd shot, whereas Avalos was absorbing plenty and an early night looked a distinct possibility.

The power packed finish really came as no surprise.

Despite the fact that Frampton was heavily favored to win this contest, the challenger was in fact rated No. 5 by THE RING at 122 pounds. He had only lost twice in 27 outings, via split decision to Christopher Martin and Jhonatan Romero, and flew to Belfast full of ambition.

The odds were simply a reflection of Frampton’s growing evolution as a prize fighter.

During a pre-fight interview with this reporter, the immensely popular 28 year old expressed his desire to face English rival Scott Quigg in what would be a colossal domestic showdown in the summer.

Quigg, THE RING’s No. 3-rated junior featherweight, recently recovered from a hand injury and has stated publicly that he would not require a warm up bout before facing the Northern Irishman.

There are fans who believe every fighter beneath the 122-pound limit has nightmares about the Cuban sensation, but Frampton fears no one and openly admits that he will not be the best until he defeats the division’s top exponent.

His performance against Avalos was further proof that “The Jackal” is a threat to any fighter within his realm.