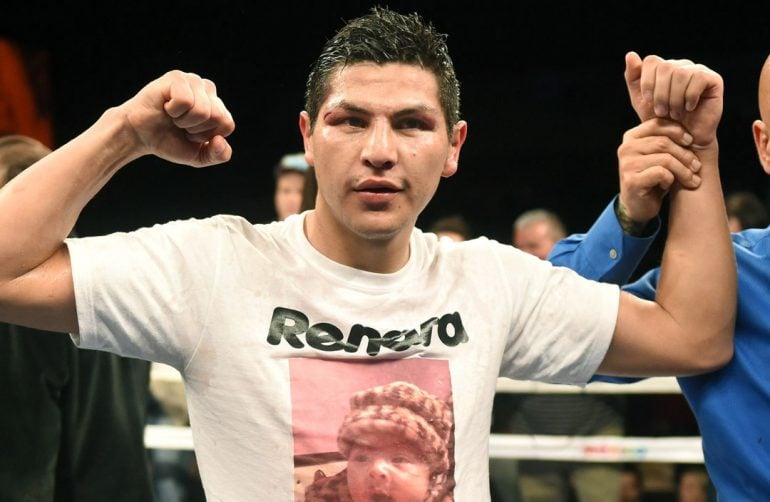 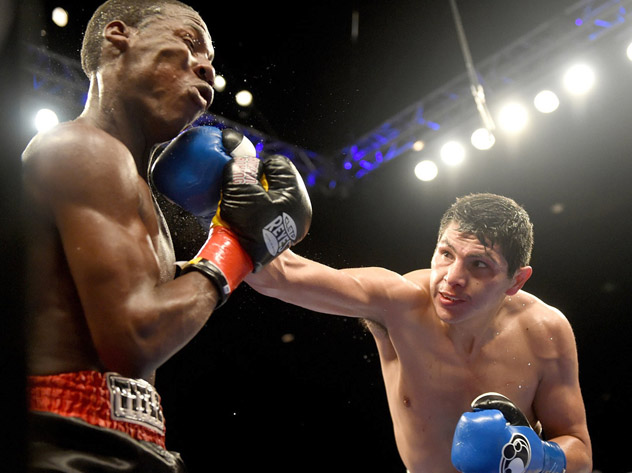 Pablo Cesar Cano lands a right hand to the iron jaw of Juan Carlos Abreu during their 10-round fight on Feb. 27, 2015. Cano won a majority decision. Photo by Naoki Fukuda

INDIO, California – Pablo Cesar Cano had his heavy hands full with Juan Carlos Abreu but the young veteran’s experience was the difference in a competitive and entertaining 10-round welterweight main event at Fantasy Springs Casino on Friday. Cano won a majority decision by scores of 97-93, 96-94 and 95-95.

The heavy handed 25-year-old technician from Tlanepantla, Mexico, was the busier of the two and he landed the harder punches throughout the fight – especially to the body – but his opponent was able to take all that he could dish out and even got the better of him in final seconds of Round 10.

Abreu (18-2, 17 KOs), a 27-year-old boxer-puncher from the Dominican Republic whose only loss was a decision to Humberto Soto in the three-division beltholder’s hometown, was as talented as advertised. His reputation was his power but what he showed is that he’s uncommonly tough and game.

Cano (29-4-1, 21) didn’t beat Abreu by overpowering the Dominican, he did so with superior technique, accurate counter punching, varied combinations and a concentrated body attack. The Mexican fringe contender, who almost lifted the WBA welterweight title from Paulie Malignaggi in 2012, used the experience he gleaned from competitive fights with future hall of famers Erik Morales and Shane Mosley to gradually impose his technique on the more mobile and athletic fighter.

The mesh of styles – Cano’s strong but technical offense and pressure vs. Abreu’s quick hands and in-and-out attack – satisfied the sold-out venue and likely made for solid TV as the main event of a Fox Sports 1-televised “Golden Boy Live!” show. 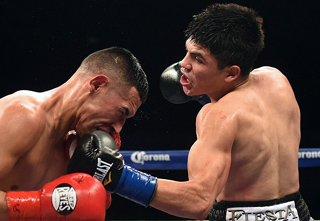 De La Hoya, a cousin of Golden Boy president Oscar De La Hoya from Mexicali, Mexico, controlled most of the rounds with quicker hands and lateral movement. Roman, a solid fighter from Paramount, California, who brought loud cheering section with him, was able to occasionally time De La Hoya with single shots but couldn’t cut the ring off on the mobile prospect, who landed pot shots on the fly throughout the fight.

De La Hoya, who went toe to toe with Roman in the final minute of Round 8, won by unanimous scores of 80-72.

In the opening bout of the Fox Sports 1 broadcast, Chinese heavyweight project Taishan rolled to 3-0 (2 KOs) with the first distance bout of his brief pro career, a four-round decision over game Tennessee journeyman Roy McCrary (3-3, 3 KOs).

Taishan, a near 7-foot former basketball player and martial artist from Beijing, dropped McCrary in 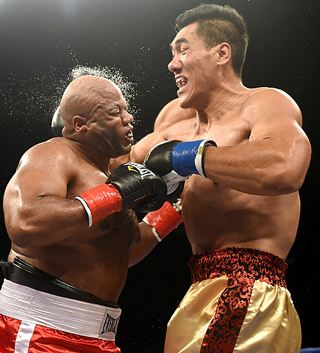 Rounds 2 and 3 with short right hands but only after eating big haymaker lefts from the Memphis resident.

Taishan, who had no amateur boxing experience, was exposed for just how raw he is by allowing the wild journeyman to rush in and nail him so often, but at least the 26-year-old giant showed a fighter’s instincts by wanting to get revenge every time he was hit cleanly.

After the fight Taishan, who had around 40 martial arts bouts, including Muy Thai and traditional kickboxing, said he wasn’t hurt by any of the haymakers MCrary landed and admitted that getting hit made him want to put a hurt on his flabby but brave opponent. He also admitted that getting four rounds of work is good for his on-going development.

Hall of fame PR man Bill Caplan told this writer that Taishan got a dressing room visit from Jermaine Jackson, who performs with brothers Tito, Jackie and Marlon on Saturday at Fantasy Springs, prior to the fight.

“I used to watch you on TV when I was little,” Taishan told Jackson.

“I doubt you were ever little,” Jackson told Taishan. 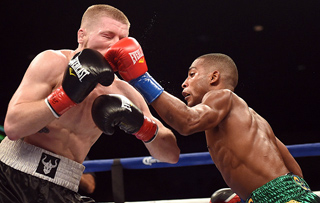 Lopes, an athletic southpaw, dropped Woolsey with an overhand left early in Round 1 and stunned the Midwesterner before the bell. The Los Angeles-based Brazilian controlled most of the action in Rounds 2 and 3 with straight lefts, one-two combinations and rights to the body.

However, Woolsey gained confidence in Round 4 and 5 as he got his legs back under him, and was able to nail Lopes with right hands as the amateur standout stayed in the pocket a little too long. Lopes, who won by unanimous scores of 60-53, outworked Woolsey in the sixth and final round.

Local favorite Neeco Macias (8-0, 4 KOs), a junior middleweight from nearby Palm Desert who lives up to his “Rooster” nickname, scored a fourth-round stoppage of Tavorous Teague (2-2-1, 1 KO), of Paramount, California.