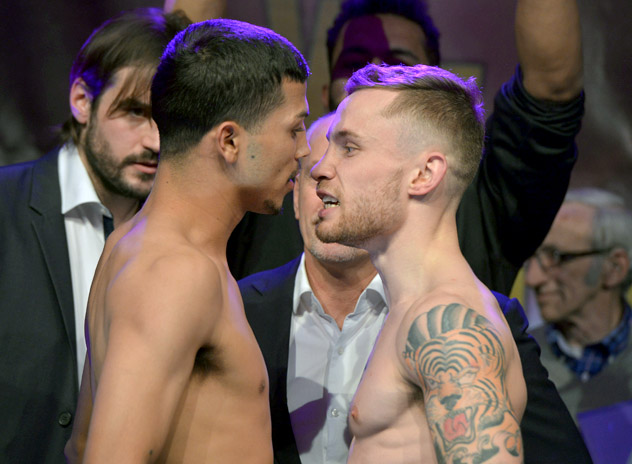 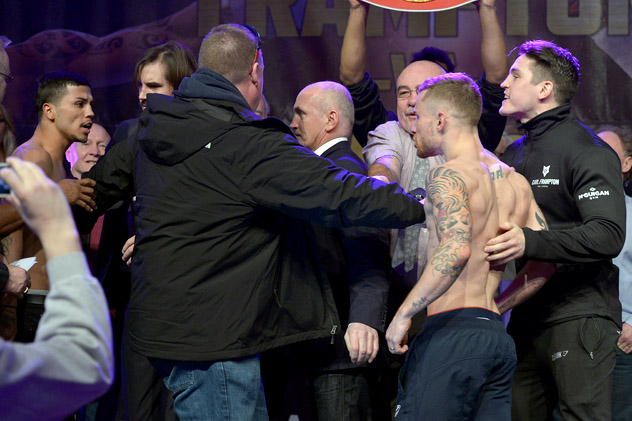 Chris Avalos (far left) and Carl Frampton are held apart at the weigh-in for their Feb 28 fight in Belfast, Northern Ireland. Photo by Charles McQuillan/Getty Images.

Belfast was given a taste of what is to come with heated scenes at today’s weigh-in for Carl Frampton’s IBF junior featherweight title defense against American challenger Chris Avalos on Saturday.

Hundreds of fans packed the Europa Hotel Ballroom and created an electric atmosphere when Frampton, rated No. 1 at 122 pounds by THE RING, and Avalos (No. 5) faced off.

As Frampton leaned forward, Avalos reacted with a shove, detonating an explosive episode that required the intervention of security to prevent an escalation. Order was quickly restored when Frampton and Avalos were directed off the stage, leaving MC Michael Buffer to conclude the proceedings.

Frampton weighed in at the division limit, with Avalos a half pound less.

It will be Frampton’s first defense of the title he won by a wide unanimous decision over Kiko Martinez in September, while the 25-year-old Avalos will be fighting in his first world-title bout.