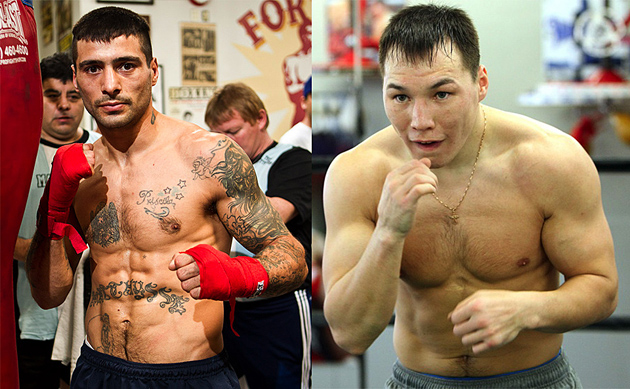 The announcement of the Ruslan Provodnikov-Lucas Matthysse fight on Wednesday didn’t exactly BREAK Twitter, but the buzz was definitely astir on the net, and if it didn’t quite bump #MayweatherPacquiao from trending completely, it did steal a bit of momentum from that “Super Bowl of boxing” bout.

And then when ringside seats at Turning Stone Casino in Verona, New York, priced quite reasonably for such an inevitably fan-friendly scuffle at $75 per, sold out almost immediately, we saw another buzz uptick on Thursday morning.

Arthur Pelullo of Banner, co-promoting with the 32-year-old Matthysse’s helmer, Golden Boy Promotions, told RingTV.com that as of 5:00 p.m., about 3,000 seats had been sold, and “I expect the arena to be sold out within two or three days.”

Pelullo knew he was helping to book an attractive bout but he was pleasantly surprised by the level of conversation and anticipation for the face-off, which pits the rugged Russian, age 31 with a 24-3 mark, and the 36-3 Argentine in a situation which almost ensures that both corners will need to bring an extra enswell and an extra vial of coagulant with them.

HBO will show the mayhem.

Fans attending should know that by Monday, after he sits and processes with matchmaker Eric Bottjer, Pelullo will have a better idea of what the undercard will look like. He said middleweight Willie Monroe, who’s been talking about wanting a crack at Gennady Golovkin, and lightweight Peter Petrov will snag spots. Golden Boy will get a full complement of their guys on the slate as well, he said.

“Listen you get a fight like this, price it right, this is what happens,” Pelullo said.