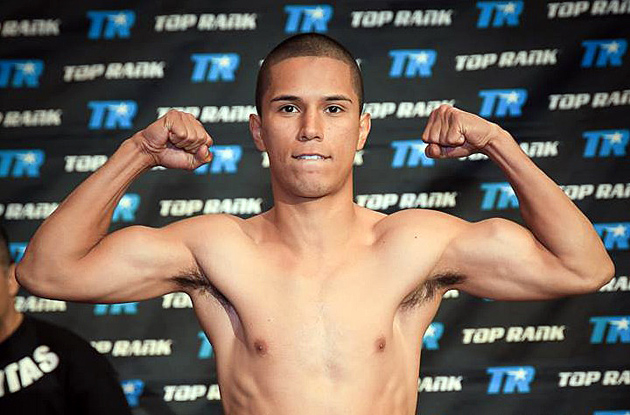 The unbeaten fighter will face Jerry Nardo in an eight-round bout at the Civic Auditorium in Glendale, Calif. The bout will headline a “Solo Boxeo” card broadcast on UniMas.

Rodriguez (16-0-1, 13 knockouts) opened his 2015 campaign on Jan. 17 in Port Hueneme, Calif., knocking out Carlos Rodriguez in the second round. The Rodriguez stoppage was Rodriguez’s eighth consecutive win by knockout.

Already one of Top Rank’s prized prospects, the Riverside native splits his time training in his hometown and in Oxnard, where he is trained by Robert Garcia.

Nardo (20-6, 11 KOs) will be fighting for only the third time outside of his native Philippines and for the first time in the United States.

In his last bout on Jan. 10, Nardo lost an eight-round split decision to Jason Redondo.

Clary (14-0, 9 KOs) hails from Providence, Rhode Island and will be fighting for the first time in 2015. In his last bout on Dec. 13 in Philadelphia, Clary won a one-sided, eight-round unanimous decision over Camilo Perez.

Solis (6-2-3, 4 KOs) should provide a significant test for Clary. Solis is unbeaten in his last six fights (three wins and three draws) and fought to consecutive draws against Gabriel Tolmajyan and Gabino Saenz in late 2013.

In his last bout on May 17, Solis stopped Yuri Trogiyanov in the sixth round.

The non-televised undercard will be announced at a later date.

Francisco A. Salazar has written for RingTV.com since Oct. of 2013 and has covered boxing in Southern California and abroad since 2000. Salazar also covers boxing for the Ventura County (CA) Star newspaper, Boxingscene.com, and Knockout Nation. He can be reached by email at [email protected] or on Twitter at FSalazarBoxing.