Christian Hammer says Tyson Fury will not last the distance 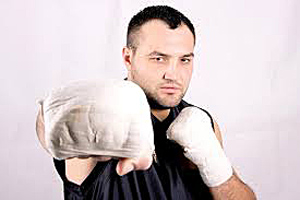 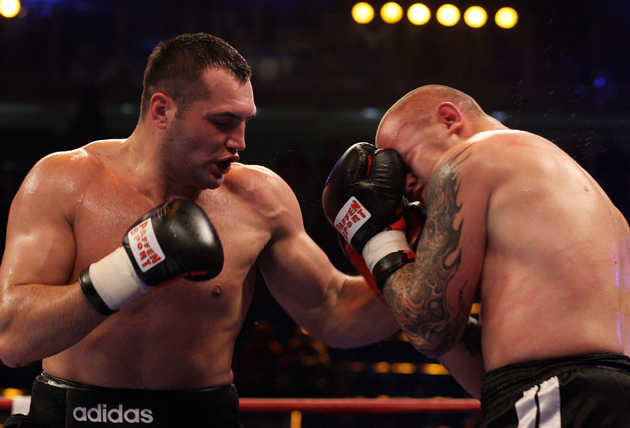 Christian Hammer (left) lands a left to Remigijus Ziausys during their six-round heavyweight bout at the Boerdelandhalle on Jan. 9, 2010 in Magdeburg, Germany. Hammer won a unanimous decision. Photo by Joern Pollex/Bongarts/Getty Images

Romanian heavyweight Christian Hammer insists he has the weapons and power to become the first man to defeat British contender Tyson Fury when they meet this Saturday, at the O2 Arena in London, England.

Germany-resident Hammer (17-3, 10 knockouts) believes Fury (23-0, 17 KOs) has made a major mistake taking him on ahead of a potential title shot at THE RING heavyweight champion Wladimir Klitschko. Indeed, he is warning that Manchester-man Fury, the WBO’s No. 1 contender, will see his dreams of ruling the division smashed to smithereens at the weekend.

“It’s show time on Saturday night! I’m here in London, nice and early, to finish my training and everything has gone perfect in camp,” said Hammer, who is on a 10-fight winning streak. “Tyson Fury will not go the distance against me. He will be getting knocked out clean and left to pick up the pieces after the fight.

“He cannot hurt me with his punches because I’m in the best shape of my career for this fight and he will not last against me.”

Hammer suspects 26-year-old Fury, having been dropped on several occasions during his unblemished career, is vulnerable against someone with his type of heavy punching ability. And he has also stated that, after taking care of RING No. 3-rated Fury, he will be the one lining up against all-conquering Klitschko, the IBF, WBO and WBA holder.

“Fury has been put down before – he can be hit and hurt,” said Hammer, 27, who fights out of Hamburg. “Fury has plenty of heart, but once I put him down he will stay down.

“I’ve taken this fight because I know I can get the Klitschko world title fight when I beat Fury. Klitschko is talking about fighting Fury – but he will be talking my name once I knockout Fury.”