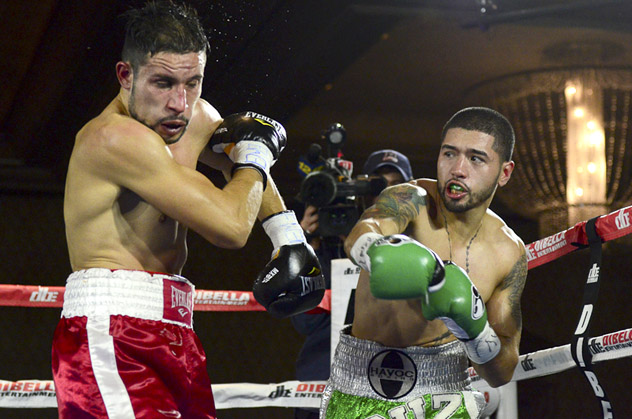 In front of a packed ballroom, fans witnessed an exciting toe-to-toe battle between Cruz (14-0 7 knockouts) and Mexican slugger Jorge Pazos (14-8-1, 8 KOs) where both men were hurt several times in the fight.

After controlling the first round with his hand speed, Cruz dropped his guard with less than 20 seconds to go in Round 2 and was knocked down with a hard left hook by Pazos. Cruz got up but was wobbly and walked to the wrong corner at the sound of the bell.

Cruz recovered on his stool and both men came out swinging furiously in Round 3 to produce an exhilarating display of will which had traces of Round 9 of Gatti-Ward I. They both hurt one another and the tide swung back and forth multiple times. On two separate occasions Cruz wound up on the ropes covering up from a blistering onslaught from Pazos. Cruz would remain composed behind his sharp jab, however, and started coming back at Pazos and backing him up. When Pazos attempted to fire back, Cruz again jabbed his way through and ended the round by stinging Pazos in the corner.

Cruz started fast in Round 4 and gained control behind a lightning-quick jab and forced the action to the ropes, where Pazos covered up. Cruz feinted to lure Pazos to miss with a hook, which set up a left to the body and then a hard left upstairs to hurt Pazos again. Pazos again back-pedaled into the ropes and Cruz followed him with additional hard shots to the head.

Cruz’s hand speed again was the difference in Rounds 5 and 6 and Pazos’ face was worse for the wear. Each time Pazos tried to get off a combination, Cruz met him with sharp jabs which disrupted his timing and forced Pazos to cover up.

“This was a great performance by Cruz,” said DiBella. “He really showed me a lot. He got hurt real bad and recovered to win the fight.”

Cruz admitted to being sloppy in the second round even though his corner told him to watch out for Pazos’ left hook.

Pazos agreed with the decision but felt he was inches away from an upset victory.

“He’s lucky I got him in the end of that round,” said Pazos in Spanish through an interpreter. “If I had just a few more seconds I would have stopped him.”

Galarza came out of his corner using a stiff jab and footwork to cut the ring off. Then, with a searing right cross, Galarza stopped Munoz in his tracks. Munoz peeled over then fell to his knees, causing the referee to call an end to the fight.

“He’s a very experienced fighter,” said Galarza. “I saw the opening when he made a mistake and I got him with my power. I trained to fight all eight rounds but he gave me the opportunity.”

DiBella also believed Galarza would be tested in the fight.

“I fully expected Frank to get some rounds in tonight but he got him with a great shot,” DiBella said. “Munoz is tough and he tried to get up but he just couldn’t.”

Galarza will next appear on Showtime’s “ShoBox” series on April 10 in Brooklyn’s Aviator Sports Complex. His last appearance on the program produced a devastating, highlight-reel knockout of John Thompson in January 2014.

“This will be a big year for Frank,” DiBella said. “Depending how Frank performs on Showtime he may have a big fight after that.”

Light heavyweight Cedric Agnew (27-2, 14 KOs) lost a split decision to Samuel Clarkson (13-3, 7KOs) in a highly competitive fight. Agnew’s only other loss came at the hands of Sergey Kovalev in March 2014.

Even though Agnew dropped Clarkson in round 2 with a good body shot and then a left to the face, Clarkson recovered to put the attack back on Agnew.

They exchanged furious blows in rounds 3 and 4 before Agnew seemed to tire and Clarkson took full advantage. Two judges scored it 76-75 for Clarkson and the other scorecard had it 76-75 for Agnew.

After a two-year hiatus, Oxnard, California’s Andrew Ruiz (8-0, 4 KOs) shook off the ring rust and put on a clinic of left-hook body shots to defeat Evincii Dixon (4-5-1, 2 KOs).

Ruiz, trained by Robert Garcia, had Ruiz hurt in Rounds 2 and 3 with hard body shots but was unable to stop him.

“It was a good performance for his first fight back,” said Garcia. “Andrew is falling back in love with the sport. He will be back soon.”

The night began with Ivan Baranchyk (5-0, 4 KOs) brutally knocking out David Thomas (4-1, 1 KO) in Round 2. Thomas stayed down for 5 minutes after the referee stopped counting. Baranchyk opened January’s “Broadway Boxing” card with an equally thrilling first-round knockout of Ian James, which also had James on the canvas long after the count ended.

And in the night’s other dramatic knockout, Sergey Derevyanchenko (4-0, 3KOs) blew away Vladine Biosse (15-6-2, 7KOs) with a TKO victory at 1:42 of Round 2. Biosse had no answer for Derevyanchenko’s blistering combinations and the fight was stopped just as Biosse was about to get seriously hurt.