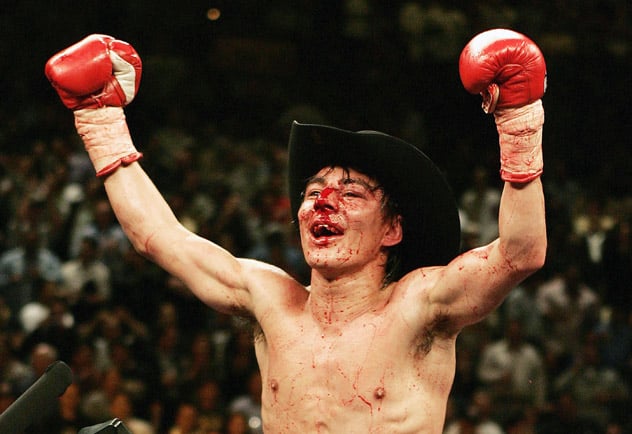 Tough as they come: Jorge Arce was one of Mexico's bravest
11
Feb
by Anson Wainwright 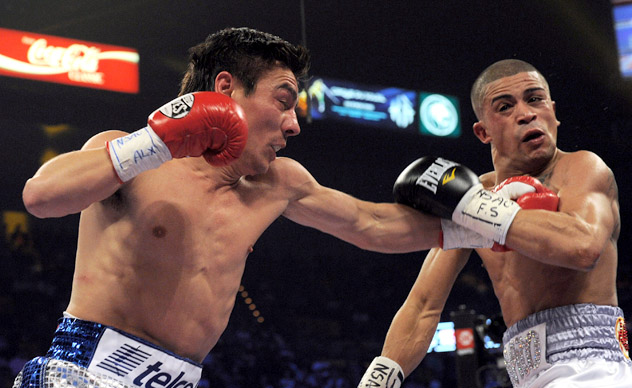 Jorge Arce is the very embodiment of a Mexican warrior, a hard-nosed fighter who always fought to the end, win or lose.

Arce always looked to challenge himself against the very best. He’s been asked many times one simple but poignant question: “Why do you never surrender?”

Arce’s reason stems back to his childhood.

“When I was young my father had an accident in work,” a highly emotional Arce told RingTV.com at the WBC convention. “Everybody was badly burnt. He was dying; it was April 3, 1992.

A young Arce wondered if he’d ever see his father alive again.

“I went to the church at the front of the hospital; I prayed, ‘Don’t go, my daddy. I promise I will be new champion of the world.’ I pray every day,” said Arce, visibly upset.

Time went by. “Maybe six months, I don’t remember,” said a more upbeat Arce in broken English. “I am at home eating an enchilada, my mom comes in and is very happy, and she smiles and says, ‘Your dad, he is safe. No more therapy.’ It changed my life.”

With the news, a highly charged Arce headed to the gym.

In early 1996 Arce turned professional, and over the next 33 months he would advance to 18-2-1. Then he received a phone call from his promoter, Fernando Beltran ,who told him: ‘You are going to fight Juan Domingo Cordoba for the WBO (junior flyweight) title.’

An excited Arce bought flight tickets, booked hotel rooms, and paid for food for his family. Beltran said, ‘Are you crazy, [the purse is] $10,000! It costs a lot of money to do all that.’ I said, ‘It’s not important to me, the money. It’s a promise to my dad, to my family.’ I talked to Fernando and told him my promise to my dad, Fernando started to cry. He said, ‘I’m so sorry, I will pay for your family. Your money is free, is for you.'”

The Mexican warrior entered the fight with a singular mentality: Tonight nobody beats me.

I went to the church at the front of the hospital; I prayed, ‘Don’t go, my daddy. I promise I will be new champion of the world.’ 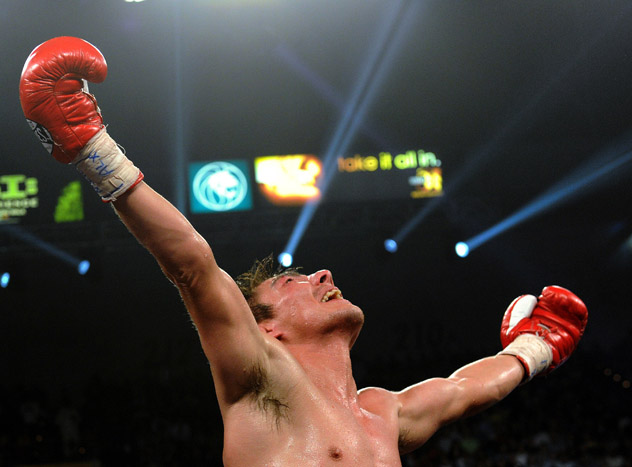 “I won a unanimous decision and the announcer says, ‘And new champion ÔÇª ‘ I called my dad over and he said, ‘It is the best night of my life.'”

Arce would make one successful defense before running into the legendary Michael Carbajal, who stopped him in the penultimate round. The mighty mite rebounded, and three years later won the WBC 108-pound crown, stopping Yo-Sam Choi.

Looking back, “Travieso” (Rascal) says that was his best win.

“When I went to Korea, I had 15,000 Koreans [against me] and nobody gives a damn for me, and then I win. That was my best performance.

“I hit him a lot and then I became the world champion. The Koreans were laughing at me. My ego was hurt and I promised I’m going to hit this guy so bad and then I did it. I knocked him out.”

Arce made seven defenses before vacating his title and heading to flyweight. In his first fight at the new weight, he was matched with once-beaten Hussein Hussein on the undercard of Erik Morales’ victory over Manny Pacquiao in 2005.

An action-packed bout followed. Arce got the better of things but faced huge adversity in the form a facial laceration that bleed profusely.

“My corner said, ‘Arce, your nose is terrible, maybe stop the fight.’ I say, ‘Hey Doc, please don’t stop my fight, I can do it.’ I knew I was winning.

“My dad is my inspiration; I know he was watching the TV. In the corner [between rounds] I said to the camera, ‘Hey Daddy, don’t worry, I’m happy, I can do it.”

And do it he did, bludgeoning the brave Australian in the 10th frame.

When people say, ‘Why don’t you surrender?’ I say, ‘My dad didn’t surrender on his life, so why would I surrender in a fight?’

He was unable to secure a fight with Thai boxing star Pongsaklek Wonjongkam, who held the WBC title, although Arce did hold the interim version.

However, in early 2010, the “Lollipop Cowboy” finally got over the hump, winning a technical decision over Angky Angkotta to claim the WBO 118-pound strap.

Arce stayed active and was matched with Wilfredo Vazquez Jr. for the WBO junior featherweight title in May 2011. He was seen by many as the proverbial lamb to the slaughter, a huge underdog. It was to be, in his opinion, his greatest moment. 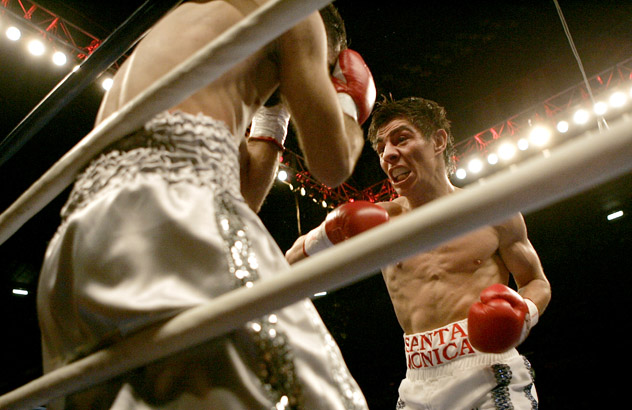 “One I remember is ‘Papito’ Vasquez in Las Vegas,” he said. “[It was on the] Pacquiao-Mosley [undercard]. He was the favorite with the betting, he was 10-1. It’s crazy. I knocked him out (in the final round of an excellent scrap).

“They thought I was old. I promised I’m going to hit him a lot. That was historic.”

Arce would gain revenge by stopping Nongqayi before going over more old ground, this time winning a unanimous decision over Angkotta to claim the WBO bantamweight belt – his fourth world title at different weights.

He would dare to be great, challenging Nonito Donaire for a junior featherweight title in 2012 but was knocked out in three rounds. Things then came full circle after his unsuccessful WBC featherweight title fight against Jhonny Gonzalez in September 2014.

“In the last fight with Jhonny Gonzalez my dad said, ‘Hey son, retire, no more fights. You promised one world championship. Now you’re going to kill me because I am afraid for you.’ I said, ‘I promise I won’t fight anymore.’ 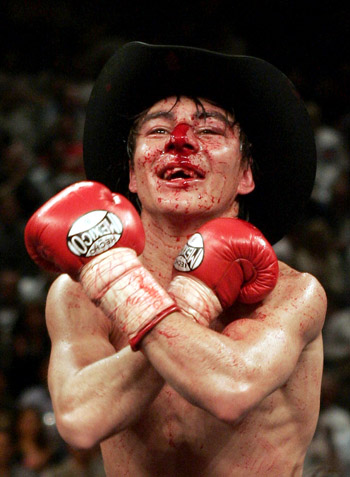 “So when people say, ‘Why don’t you surrender?’ I say, ‘My dad didn’t surrender on his life, so why would I surrender in a fight?'”

Arce is very popular in Mexico, having appeared in prominent TV shows ‘Big Brother’ and ‘Dancing with the Stars’ (he came in fourth place).

Today the 35-year-old works for Mexican broadcaster Televisa. He is married with children.

“I’m enjoying my life,” he said with a smile. “I saved a lot of money, I invested in properties. Boxing is my life, my passion. I’m still in there as a commentator and I am happy.”

Arce kindly agreed to pick the best he fought in 10 key categories.

BEST DEFENSE – Cristian Mijares: “He was a southpaw, very difficult for me to connect my strongest punches. I lost my mind; I just wanted to hit him!”

BEST CHIN – Rafael Concepcion: “From Panama. I hit him so bad and I didn’t knock him down. He wouldn’t go down!”

BEST PUNCHER – Michael Carbajal: “Whenever he hit me it hurt. The jab hurt my hands. (Arce mimics catching Carbajal’s punches on the gloves, grimacing) Ouch, ouch. His hands were like steel. Carbajal’s punches were like being hit by a steel bar. I remember every punch he gave me in the 11 rounds ÔÇª Donaire is very fast, very explosive and Jhonny is very hard, very strong, different punches. Carbajal is the strongest.” 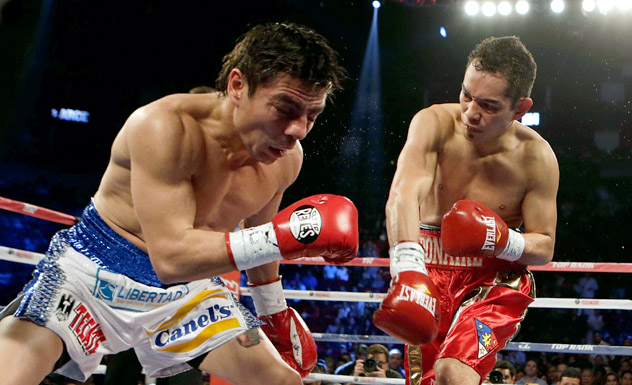 FASTEST HANDS – Donaire: “He is very fast, he was moving all around.”

FASTEST FEET – Donaire: “The feet were very fast, he appears here then he appears there.”

SMARTEST – Gonzalez: “He knows the rhythm of a fight, he has the timing of the fight. When he wants to come and fight inside he came to me and he punched me and then he disappears. When he felt I’m going to hit him with a good punch, he moves. He was very smart.”