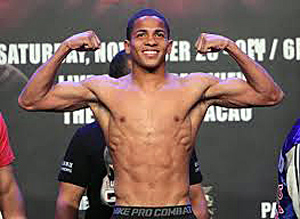 Unbeaten Puerto Rican prospect Felix Verdejo is withdrawing from his Feb. 28 bout in Tampa, it was announced on Tuesday morning.

According to a press release, Verdejo suffered an injury to his left hand during training camp last week. X-rays revealed no fracture, but there is inflammation of the ligament of the metacarpal tendon.

A physician ordered Verdejo not do any mitt work with his hands for three to four weeks.

Verdejo was scheduled to fight Marco Antonio Lopez in an eight round bout at the Corral inside the Sun Dome in Tampa. His bout was to be televised on UniMas.

“Hand injuries are unfortunately part of the temporary roadblocks that all fighters suffer (from), regardless of their level,” said Carl Moretti, who is the Vice President of Boxing Operations for Top Rank. “Felix is no different in that aspect. We hope to re-schedule him as soon as his injury is properly healed.”

Top Rank will continue to promote the “Solo Boxeo Tecate” card. Unbeaten Julian Rodriguez and Esquiva Falcao will highlight the card in separate bouts. Both bouts will be televised on UniMas at 11 p.m. ET/ PT.

Francisco A. Salazar has written for RingTV since October of 2013 and has covered boxing in Southern California and abroad since 2000. Salazar also covers boxing for the Ventura County (CA) Star newspaper, Boxingscene.com, and Knockout Nation. He can be reached by email at [email protected] and on Twitter at FSalazarBoxing