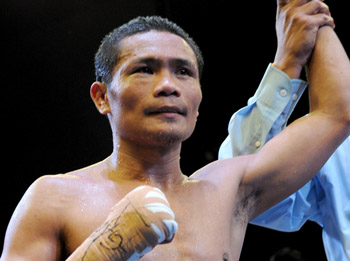 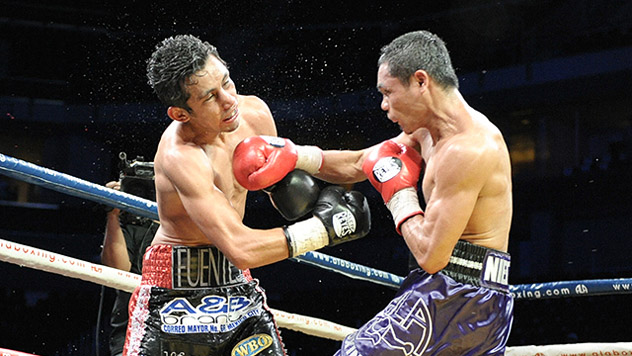 Donnie Nietes (R) connects with Moises Fuentes on the way to winning THE RING jr. flyweight title on May 10, 2014. Photo by Denmark Delores.

Nietes (34-1-4, 20 knockouts) of Bacolod City, Philippines, has made six defenses of the WBO belt since moving up in weight in 2011, and knocked out Moises Fuentes in May of 2014 to gain lineal recognition.

Ceja (26-5-3, 21 knockouts) of Tlalnepantla, Mexico, has won two straight after a period between 2012 and 2014 where he lost four of his six bouts. Despite Ceja’s inconsistencies, Nietes’ promoter Michael Aldegeur of ALA Boxing feels the 24-year-old is a worthy challenger for the 32-year-old champion.

“We got the contract yesterday (Saturday) so that’s confirmed already,” said Aldegeur. “We’ve heard a lot about [Ceja], he can punch. I think it’s something that we feel would be a good fight for Donnie. He’s a Mexican and a lot of people want to watch a Mexican and a Filipino fighting.”

The bout would be a final voluntary defense before Nietes faces former WBO strawweight titleholder Francisco Rodriguez Jr. in a mandatory defense. Rodriguez (17-2-1, 11 KOs) avenged an earlier draw with Filipino boxer Jomar Fajardo over the weekend, dropping him once en route to a unanimous decision.

Aldegeur says a fight between Nietes and Rodriguez could take place in June, with negotiations likely to begin this coming week.

Also appearing on the card will be former four-division champion Nonito Donaire, who will be returning to the ring for the first time since his knockout loss to Nicholas Walters. Aldegeur says “we have some names coming up” but no opponent has been settled upon.

The fight will be Donaire’s first in his country of birth since 2009, when he knocked out Raul Martinez in four rounds.