Keith Thurman to prepare for ‘roughhousing’ vs. Robert Guerrero 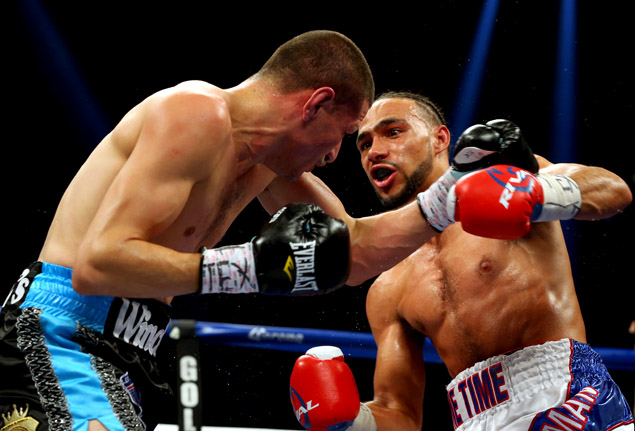 Keith Thurman will do whatever it takes to achieve victory over Robert Guerrero, even if it means doing a little wrestling.

“We’re obviously going to bring southpaws sparring into the camp but I’m not going to be able to bring Guerrero into the camp,” said Thurman, 26, whose goal includes being the first fighter to knock out the left-handed Guerrero. “You know what I mean? So there should be a few minor changes that I’m going to have to make on fight night but we’re going to do the best that we can to be prepared for the fight.”

THE RING’s No. 7-rated welterweight Thurman (24-0, 21 knockouts) will face No. 8 Guerrero (32-2-1, 18 KOs) at Las Vegas’ MGM Grand on March 7 on the premiere episode of NBC’s new boxing series titled “Premier Boxing Champions” (“PBC on NBC”). Thurman-Guerrero will be have of a doubleheader that includes No. 5-rated junior welterweight Adrien Broner opposite John Molina on a show that commences a multi-year deal between the network and adviser Al Haymon.

“We’ll find out who will be the bigger guy, physically, when we get into the ring against Thurman,” said Guerrero, who will be in his fifth 147-pound bout since rising from the lightweight division. “In my past few fights, I think that I’ve been the bigger guy. I’m seriously climbing up in weight and now, I’m a full-fledged 147-pounder. Now it’s time to take care of business.”

“A lot of people don’t realize that I came up from 135 pounds straight to 147,” said Guerrero. “So it takes time for you to build into that after jumping to weight classes, especially after starting my pro career at 122 pounds. It’s a long road, climbing that ladder.”

Thurman plans to employ some new tactics against Guerrero, in part, to avoid the brand of punishment Guerrero inflicted on Andre Berto in Nov. 2012.

“He wants to fight and if you’re holding him or he’s holding you, that doesn’t mean that he’s going to stop fighting. He will keep fighting every second of the fight. He’s well-conditioned from what I’ve seen. He’s saying that he’s going to be prepared. I believe the man. We’re at the world-class level. Every fighter at this stage should be prepared.”

“The last guy that [Thurman] fought [Bundu]…That guy was the slowest guy on his feet ever. Mayweather is fast. I’ve been in there with him. He is fast on his feet and with his hands. That guy was no comparison at all,” said Guerrero.

“I’m going to do a little wrestling in my training camp here,” said Thurman. “We’re going to get ready. I don’t want it to be a shock to me. He’s not going to be able to surprise me by roughhousing me on the inside. We’re going to do the best that we can.”