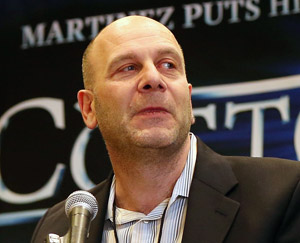 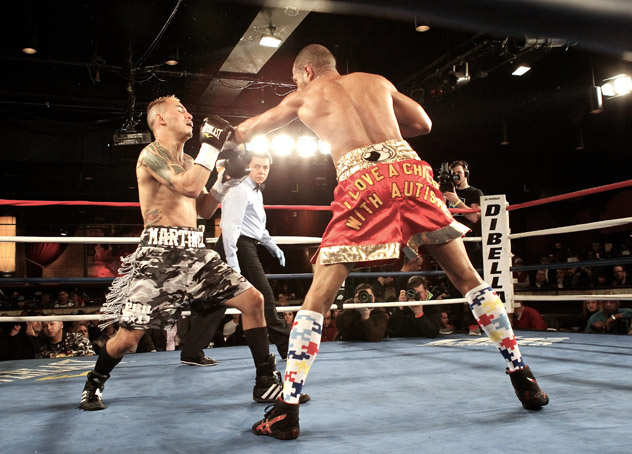 Just hours before the opening bell rang at the BB King Blues Club in Times Square, DiBella was en route to the hospital where his friend and fellow promoter, Cedric Kushner, had died of a heart attack.

DiBella dedicated the entire night to Kushner’s memory and even delivered an impassioned speech about their friendship just prior to the evening’s main event between junior featherweights Rafael Vazquez and Joseph Rios.

Vazquez improved to (13-1-0, 10 knockouts) and earned his fifth consecutive knockout when Rios (13-12-2, 4 KOs) could not answer the bell for Round 5 after being knocked down right before the end of the fourth.

Vazquez dominated the fight from the start by cutting off the ring and imposing his height advantage and a crisp left jab.

In the second round Vazquez started to unload hard, left-handed body shots, causing Rios to stumble into the ropes. When Rios tried to hold and clinch, Vazquez moved right and landed a looping left hand which sent Rios to the canvas. Rios barely survived the round after getting caught with a right uppercut and then a left hook.

Vazquez went back to his sharp jab in Round 3 and set Rios up for two left hooks that almost caused another knockdown. Vazquez let him off the hook and later admitted he’d hurt his right hand from hitting Rios’ head.

In the fourth round Vazquez relied on the jab again and did not let Rios breathe, finally landing a right hook to the body that sent Rios down again. Rios walked back to his corner at the end of the round and would not return.

“Vazquez is a heavy puncher,” said DiBella immediately after the fight. “He is dangerous against anyone in this division. He can give any world champion problems.”

Vazquez said he has all the motivation he needs when he thinks about his family in the crowd.

“I’m 37 years old. My daughter has autism and my wife is battling cancer for the second time,” Vazquez said. “I can’t afford to lose a fight right now.”

In the night’s co-main event, featherweight prospect Luis Rosa (18-0, 8 KOs) simply blew out Noel Echevarria (11-5, 6 KOs) with a first-round knockout that sent the crowd into a frenzy.

Rosa, a southpaw, came out firing a barrage of big lefts, knocking Echevarria down less than a minute after the opening bell. Echevarria slowly got up and the punishment continued with a hard body shot and then Rosa landed a big left hand, sending Echevarria down for good.

DiBella went on to proclaim that Rosa is ready for the next level.

“We’ve had something like 20 world champions fight on ‘Broadway Boxing,'” DiBella added. “Rosa will be number 21. Oscar De La Hoya said he only wants to make good fights. I will put Rosa up against any of his 122-pounders. Let’s do it, Oscar!”

The card featured four other fights that ended early with knockouts and stoppages. Hard-hitting cruiserweight prospect Travis Peterkin (14-0, 6 KOs) gave Julio Garcia (6-8, 3 KOs) all he could handle in the opening round, including a crushing left hand right down the middle which snapped Garcia’s head all the way back. Garcia was unable to to answer the bell for the second round.

The night got off to a hot start with three straight knockouts, beginning with junior welterweight Ivan Baranchyk (4-0, 3 KOs).

Baranchyk waited for Ian James (3-11-1, 1 KO) to make a mistake early and then landed a combination right cross and left hook, flattening James into the canvas for a first-round knockout.

Light heavyweight Lennox Allen remained undefeated by knocking out an awkward Kojo Issah (14-2-1 7 KOs) with a right hook to the body in the second round. Allen improved his record to 18-0-1, 11 KOs.

Middleweights Ivan Golub (5-0, 4 KOs) and Rashawn McCain (2-3) fought the most entertaining round of the evening.

The two southpaws exchanged bruising counterpunches and marked each other’s faces up until Golub landed his left hook with more authority and knocked McCain out with under a minute to go in the opening round. The brutal knockout set the stage for the rest of the night.