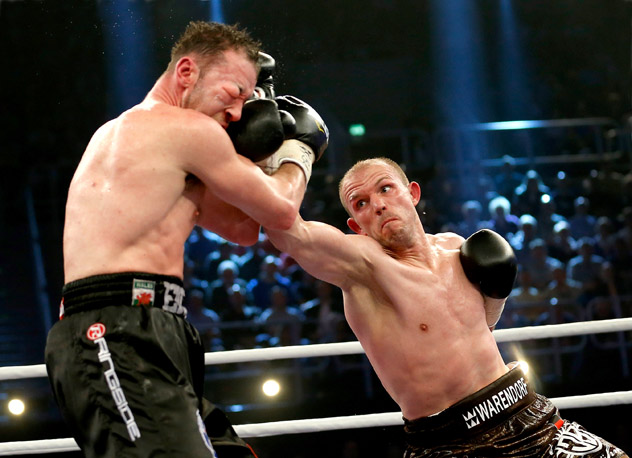 RING No. 4-rated light heavyweight Juergen Braehmer will “not hesitate to make it an early night” in pursuit of his 15th straight win against German countryman Robin Krasniqi on March 21 in Rostock, Germany, he said during a press conference on Thursday.

“This is a chance for Juergen to prove why he belongs at the top,” said promoter Kalle Sauerland of Sauerland Event. “Since his comeback in early 2013, Juergen has excited the masses with his performances. Last time around, he set the record for fastest KO in a world title fight in light heavyweight history. In Rostock, Braehmer will show his class inside the ring once again.”

“Krasniqi has earned his shot…I’m happy to prove myself against him in this domestic showdown, which will have all of Germany talking,” said Braehmer (45-2, 33 knockouts), 36, a former WBO 175-pound titleholder. “I will, as always, prepare for the full 12 rounds. But if the opportunity arises, I will not hesitate to make it another early night.”

Krasniqi, (43-3, 16 KOs), was last in action for last month’s unanimous decision over Dariusz Sek, representing his fourth straight victory since being unanimously decisioned by then-WBO beltholder Nathan Cleverly in April 2013.

“It’s a big honor to share the ring with a prolific fighter like Braehmer. He was already a top-notch boxer when I started my professional career,” said Krasniqi, 27. “It would mean a lot for me to win…especially as my coach, Dirk Dzemski was beaten twice by Braehmer in the amateurs. I will avenge those losses for him.”

[Note: THE RING only recognizes RING No. 1-rated Sergey Kovalev as the WBA titleholder as well as the IBF and WBO beltholder.]