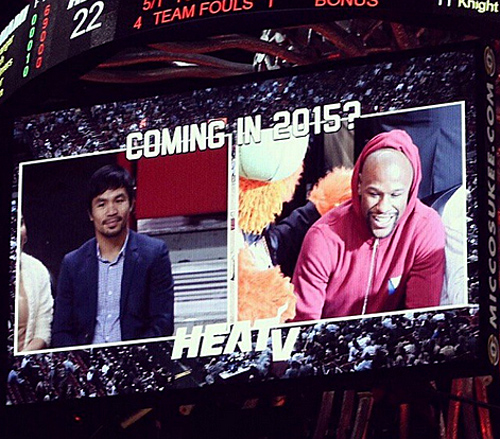 Hardcore boxing nuts have been “in a twitter” (quite literally) since the chance face-to-face meeting between Floyd Mayweather Jr. and Manny Pacquiao at a Miami Heat game on Tuesday. (Or you can call it a planned “confrontation” if you care to believe Mayweather’s various spokespersons.)

News of an hour-long follow-up discussion in Pacquiao’s hotel suite after the NBA game has even general sports fans waiting to hear an announcement from boxing’s two biggest stars.

So just when the sport’s understandably jaded fans began to settle on the prospect of a Mayweather-Miguel Cotto rematch on May 2, and possibly seeing Pacquiao face Amir Khan (or Jessie Vargas if you’re really cynical), the buzz and hopefulness for boxing’s never-ending story to finally come true is once again at its peak.

Will it finally happen? More than a few industry insiders are cautiously optimistic that it will be announced by Super Bowl Sunday, Feb. 1, the cutoff date that Pacquiao’s side had set before Tuesday’s hotel-room conference, maybe even during the big game.

With Mayweather-Pacquiao fever still burning in the heads of fight fans everywhere, let’s take a look at five pros and five cons connected to what could be the biggest event in boxing history.

1) Pro: After more than five years of false starts and hopes, THE fight demanded by the public – not just the boxing world, but anyone with even a passing interest in this insane sport worldwide – is finally made.

Con: Mayweather-Pacquiao is all anyone – hardcore freak and casual fan – will talk about until May 2 (and probably beyond depending on how the fight goes). The boxing industry will be absolutely fixated on this fight. Anything occurring between the fight’s announcement through May will be buried under round-the-clock, minute-by-minute Mayweather-Pacquiao coverage. That means good fights and notable events already on the boxing schedule – such as Keith Thurman-Robert Guerrero, Danny Garcia-Lamont Peterson, Wladimir Klitschko-Bryant Jennings and Canelo Alvarez-James Kirkland – as well as fascinating matchups still in the works, such as Lucas Matthysse-Ruslan Provodnikov, Terence Crawford-Chris Algieri and Guillermo Rigondeaux-Leo Santa Cruz, will be overlooked.

2) Pro: Mayweather-Pacquiao will command so much public interest even mainstream sports and entertainment media will follow it. This event could get the kind of attention that the Muhammad Ali-Joe Frazier trilogy and Sugar Ray Leonard’s fights with Roberto Duran, Thomas Hearns and Marvin Hagler received from daily newspapers, magazines and network television.

segments on big fights? No? Well, this will be a surreal experience for you.

Con: We’re going to have to listen to the inane observations of the mainstream press for three straight months (which isn’t to say the ramblings of the boxing media – this writer included – aren’t equally ridiculous, but hey, at least we actually cover the sport on a day-to-day basis).

3) Pro: We will finally get to find out who the best welterweight and who the No. 1 boxer, pound for pound, on the planet is.

Con: Until the fighters decide this in the ring, we’ll have to stomach round-the-clock bickering between the obnoxious diehard fans of Mayweather and Pacquiao on social media and the comments section of any website that posts an article about the event. 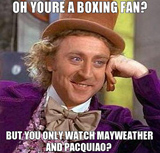 And it WILL get ugly – the type of nasty ugly that only aimless anonymous internet posters are willing to stoop to.

We can forget about any sort of thoughtful or respectful dialog and debate between the hardcore Mayweather and Pacquiao factions within boxing fandom. The online boxing universe will be under siege for three months as the lowest common denominator of the sport’s followers spew the most hateful, vulgar, racist, homophobic and misogynist insults imaginable at each other.

4) Pro: The power brokers of American boxing – Mayweather, HBO, Showtime, Bob Arum and Al Haymon – will prove that they can put aside their personal differences and corporate agendas in order to deliver the mega-event that the world has demanded.

Con: They’ll probably all hate each other even more after working together to make this happen.

5) Pro: We might actually get a competitive, compelling boxing match. Will it be Hagler-Hearns or Leonard-Hearns? No. Both Mayweather and Pacquiao are past their athletic primes, and Mayweather has never been an action fighter. However, what looked like a non-competitive fight in 2012 and 2013 (due to Pacquiao’s decline and seeming demise as an elite boxer following back-to-back losses) now appears to be an interesting matchup given their 2014 performances.

Con: If the fight is even mildly competitive, we gotta go through the whole rigmarole at least one more time.