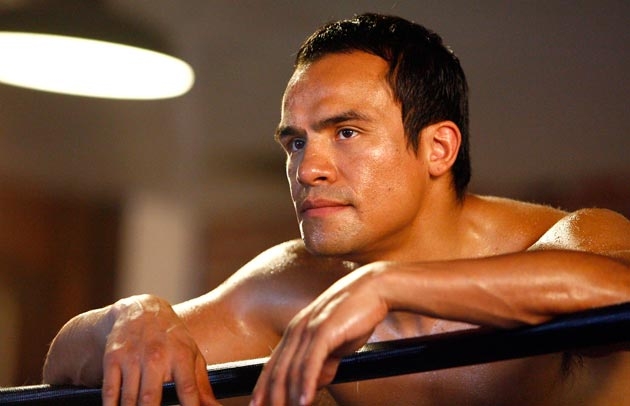 Four-division titlewinner and former RING junior welterweight champion Juan Manuel Marquez worked out alongside lightweight Daniel Estrada in advance of Estrada’s clash with British contender Kevin Mitchell at the O2 Arena in London on Saturday, according to Eddie Hearn of Matchroom Sport.

“I trained or went running with [Estrada] often and it was a good training camp. He comes here in good condition. He comes to win like all fighters do. He’s doing very well in terms of his condition. It was a tough and hard training camp and he’s here to put on a great fight,” said Marquez, whose trainer, Nacho Beristain will be in the corner of Estrada (32-3-1, 24 knockouts) against the hard-hitting Mitchell (38-2, 28 KOs).

“Daniel wanted to run in the mountains to be in great shape and get that strength and we’re hoping to see the results of that on Saturday. I form part of his team and I also have something to do with the promotion of Daniel with Fernando Beltran and Zanfer Promotions. At the same time, I support him in terms of training and what he has to do as a boxer. We help him outside of boxing as well.”

The 29-year-old Estrada was last in the ring for a ninth-round knockout loss to then-WBC titleholder Omar Figueroa Jr. in August, ending a nine-fight winning streak that had included five knockouts.

In the wake of the injured Figueroa being stripped and declared a “champion in recess” by the WBC, former featherweight and junior lightweight titleholder Jorge Linares knocked out Javier Prieto for the vacant 135-pound belt last month.

Mitchell, 30, has stated his desire to face Linares but Estrada wants a second opportunity as well, according to Marquez.

Mitchell will be after his sixth straight victory in a run that has included four consecutive knockouts, the last coming in the 11th round over previously unbeaten Ghislain Maduma in May.

“Mitchell is a good fighter. He’s a man who has kept himself at a good level in terms of his style of boxing. I think it’s a difficult fight for Daniel. It’s difficult because of Mitchell’s style and also because the fight is in his country,” said Marquez, 41.

“It’s an interesting and important fight and it will be good for the fans watching. I always say that when a Mexican is in the ring, he’s going to put on a good show and he wants the victory. That’s why fans enjoy fights involving Mexicans.”

Figigueroa-Estrada took place on the undercard of a main event during which RING No. 2-rated welterweight Kell Brook of England won the IBF’s belt from Shawn Porter. Beltran has said Marquez “would love” to fight Brook, who could be ringside on Saturday. Brook, who is promoted by Hearn, must get beyond the first defense of his belt against Jo Jo Dan on March 28,

Note: Marquez’s quotes from a release