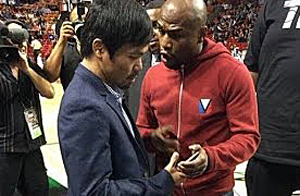 Pacquiao and Mayweather are in negotiation for a May 2 bout, with Pacquiao having given Mayweather a deadline of the end of “this month.”

Pacquiao, meanwhile, is reportedly agreeable to the demands of Mayweather, which included a 60/40 split of the purse in favor of the undefeated fighter, as well as the site (the MGM Grand in Las Vegas) and a drug-testing protocol.

Spotting Mayweather, Koncz said he approached and spoke to the pound-for-pound king, who then came over to meet with Pacquiao.

“They both, unplanned, happened to be at the basketball game, but out of respect for Floyd, I have no comment on the brief conversation that Manny and Floyd had. To come walking across the court to Manny, I give him the utmost credit for that,” said Koncz, adding that he had already received “too many” calls about the fighters’ interaction.

“I briefly spoke to Floyd, and Floyd decided to come over and talk to Manny, and it was a pleasant, nice, friendly, professional conversation. That’s as much as I want to say about it, because I don’t want to violate any trust that we’re building, Manny and I, with Floyd.”

The union occurred at halftime, according to a report by ESPN news services, and included Mayweather and Pacquiao shaking hands,chatting briefly and exchanging phone numbers.

“He gave his number to me and said we will communicate with each other,” said Pacquiao, who was meeting Mayweather for the first time in person, according to an ESPN report.

Koncz would not characterize the talks.

“I have no comment on the negotiations,” said Koncz. “I have the utmost respect for Floyd.”

Mayweather and Pacquiao were also in the same arena in November 2001, when Mayweather knocked out Jesus Chavez in defense of his WBC junior lightweight title, and IBF beltholder Pacquiao battled to a draw with the WBO’s Agapito Sanchez at the Bill Graham Civic Auditorium in San Francisco, Calif.