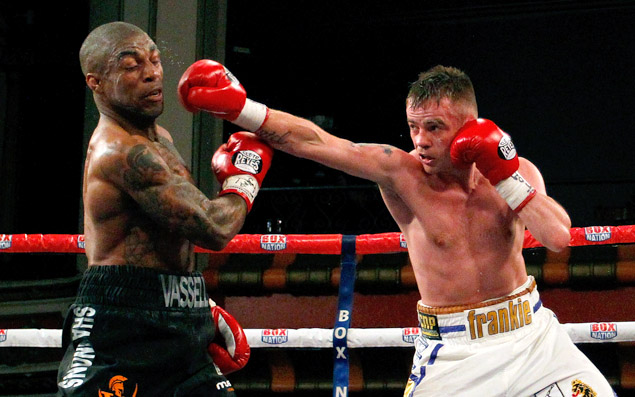 “I can’t wait to get going with Matchroom. I don’t think many people have seen me fight recently but I am back in Birmingham and back on Sky Sports and the sky is the limit,” said Gavin, 29.

“The fight against Kell Brook is the aim for me. I am No. 5 in the IBF rankings and he is the champion. Hopefully by the end of the year or the start of 2016, I can fight him for the title.”

Gavin (21-1, 13 knockouts) has won two consecutive fights since losing by split decision to Leonard Bundu in August. In his past two bouts, Gavin has scored a technical knockout over Mate Hornyak in October as well as a unanimous decision over previously undefeated Bradley Skeete in November.

“Frankie has long been one of the most talented fighters in the country and now it’s time to shine,” said Hearn. “I haven’t seen him smile for a long time and now it’s ‘Fun time.’ Time to enjoy his career, the exposure and the big lights.”

Gavin is also scheduled to headline a show at the Barclaycard Arena in Birmingham, England on May 9 that will include the return of middleweight title challenger Matthew Macklin, welterweight Sam Eggington, junior flyweight Kai Yafai and his brother, junior featherweight Gamal Yafai.

“You’ve got Matthew, the Yafai brothers and Sam on the May 9 bill already. We’re all from different parts of Birmingham and we’re all going to bring great support to the shows,” said Gavin. “There’s going to be space for a lot of young local lads to get on the bill and make a name for themselves, so it’s great news for boxing in Birmingham.”