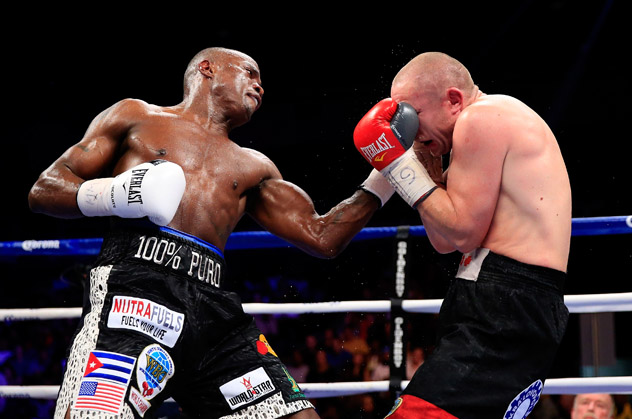 Calling Andy Lee “a durable guy” who has “taken some setbacks,” RING No. 2-rated Peter Quillin would invite a middleweight clash with the southpaw from England.

“Not confirming that we’re fighting or anything but he’s a very durable guy and he’s a guy that is a middleweight who is experienced,” said Quillin, 31. “He’s taken some setbacks but I think that a setback can set you up for a bigger comeback. I always give guys credit. He became the middleweight champion of the world, which a lot of people don’t get the opportunity to become.”

Lee (34-2, 24 knockouts) is coming off November’s sixth-round technical knockout over previously undefeated Matt Korobov for the title vacated by Quillin (31-0, 22 KOs). Korobov represented Lee’s sixth consecutive win during a run that has included four stoppages since being knocked out in the seventh round by Julio Cesar Chavez Jr. in June 2012.

Although a purse bid has been ordered for Tuesday between Lee, 30, and mandatory challenger Billy Joe Saunders, Lee’s promoter, Lou DiBella is reportedly considering an April 11 bout between Lee and Quillin, who is advised by Al Haymon.

It is unclear whether or not a fight between Quillin and Lee would be for the title.

“I think there’s a reason why guys want to fight me. Is it really about the belts or is it my name giving that I might be worth a little bit of money?,” asked Quillin, who stood to make a career-high $1.4 million for a defense against Korobov, which he turned down. “I always know that Al Haymon is going to work in my best interest, so I don’t have no worries about what can happen if they’re talking about the Andy Lee fight.”

If agreed upon, Lee-Quillin would happen on the undercard of a 143-pound clash between RING/WBA/WBC junior welterweight champion Danny Garcia and IBF titleholder Lamont Peterson, according to ESPN.com.

“I’m not going to knock Andy Lee for what he’s accomplished,” said Quillin. “Not to be cocky or self-centered but I think that my hard work has paid off where I’m worth that type of value to another fighter.”