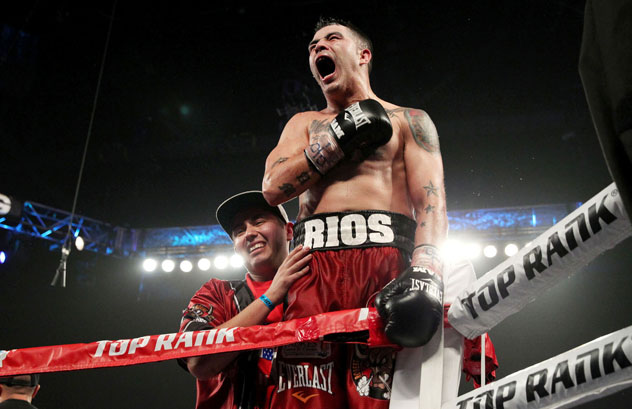 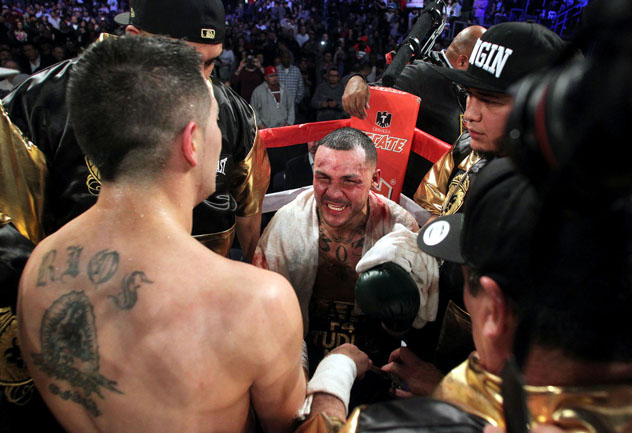 Brandon Rios: That’s how you demonstrate you’re career isn’t over. Rios emerged from his corner at the opening bell of his rubbermatch with Mike Alvarado on Saturday like the dynamo at his best, raining a wide variety of punches upon Alvarado until everyone agreed that enough was enough after three gruesome rounds. The CompuBox punch stats give you an idea of how one-sided the fight was: Rios landed 120 of 290 punches, Alvarado a mere 20 of 87. That doesn’t capture the viciousness of Rios’ attack, though. Rios was coming off consecutive losses and then an unsatisfactory disqualification victory, leaving his career as an elite fighter in doubt. He fought like a man trying to save his livelihood. Rios busted up Alvarado with every conceivable weapon, most notably a head-rattling uppercut that he landed at will. A huge uppercut in the third round forced Alvarado to take a knee. The fight was stopped with Alvarado on his stool moments later, securing a spectacular victory for Rios (33-2-1, 24 knockouts). Thus, the former lightweight titleholder won two out of three in his compelling series against Alvarado and re-established himself as a legitimate title contender, this time at welterweight. Rios couldn’t have had a better night.

Mike Alvarado: That’s how you demonstrate your career is over. I don’t know what Alvarado’s problem was beyond a determined opponent Saturday night in front his hometown fans in Broomfield, Colorado. Is he shot? Was he simply ill-prepared? The only thing we all know for sure is that the fighter we’ve seen in the past didn’t show up Saturday. Alvarado (34-4, 23 KOs) has had a number of taxing fights, including the three with Rios and one each against Ruslan Provodnikov and Juan Manuel Marquez. Maybe those wars have taken a toll. More likely, it was a lack of preparation – both physical and mental – that spelled his doom against Rios. That’s what he suggested after the fight. Alvarado is a veteran, battle-tested fighter. He knew Rios well after two fights. He should’ve been able to defend himself. Instead, he was utterly overwhelmed. It seemed clear that he had no desire to be in the ring, which is why he was ready to quit after three brutal rounds and deserved booing afterward. It was one of the weakest performances by a proven fighter in recent years, one that badly damaged his reputation. He insisted after the fight that he isn’t finished. We’ll believe that when we see it.

Gilberto Ramirez: Ramirez’s performance against Maxim Vlasov on the Rios-Alvarado card was somewhat disappointing because the hype surrounding him seemed to promise something special in his first fight on HBO. Instead, the Mexican walked away with a solid victory and a valuable learning experience. And that’s fine. Vlasov (30-2, 15 KOs) is a pretty good fighter. The Russian veteran’s awkward style and ability to land a straight right gave Ramirez problems throughout their 10-round bout, which was fought at a catchweight of 171 pounds. Plus, Vlasov, a light heavyweight, was the naturally bigger man. Still, an unfazed Ramirez clearly outworked his opponent – focusing most notably to the body – to win a unanimous decision, 96-94, 97-93 and 97-93. I scored it 98-92. Was it the dazzling performance some expected from him? No. It is difficult to imagine the version of Ramirez we saw on Saturday becoming an attraction on the level of countrymen Canelo Alvarez and Julio Cesar Chavez Jr. At the same, that’s the type of fight that helps a young boxer grow. Remember: Ramirez is only 23. His future remains bright.