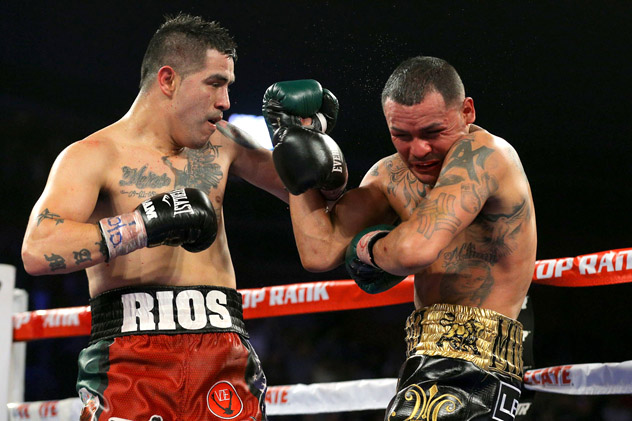 What they got was a brief and brutal slaughter. Alvarado, who lost their first fight by seventh-round TKO but rebounded to win their immediate rematch via close unanimous decision in the finest performance of his career, was never in the third bout, which was televised live on HBO from the 34-year-old veteran’s home region of Bloomfield, Colorado.

Alvarado had never been dominated in the fashion that Rios beat him down on Saturday. Alvarado was all but helpless as Rios (33-2-1, 24 knockouts) pummeled him from the opening bell, reducing his face to a bloody mask, dropping him to his knees in Round 3, and convincing the fighter and ringside physician that he was finished before the start of Round 4.

Alvarado’s poor effort begs the question: What happened to him?

Boxing happened to him. That’s the obvious answer. Boxing is often called the Sweet Science, the art of hitting without getting hit in return, but the flip side to that philosophy and style is the “Savage Science” – the craft of give and take – and the bad-asses that are more savage than scientific in the ring usually don’t have long-lasting careers.

The great Joe Frazier was a spent bullet, completely finished with his hall-of-fame career, by the time he had as many fights (37) as Alvarado entered the ring with on Jan. 24. Like Smokin’ Joe, Alvarado (34-4, 23 knockouts) never backed away from a slugfest. And Alvarado had six consecutive ring wars – often taking more than he gave in each fight – going into the third bout with Rios.

It began with his come-from-behind TKO of Breidis Prescott in November 2011. After that final-round stoppage, Alvarado went toe to toe with Mauricio Herrera for 10 rounds, outpointing the hardnosed contender; then he split his two fight-of-the-year candidate bouts with Rios before suffering his punishing 10th-round TKO to hard-punching pressure fighter Ruslan Provodnikov. Last May, Alvarado attempted to rebound from the Provodnikov beating against Juan Manuel Marquez, and traded knockdowns with the future hall of famer en route to losing a one-sided unanimous decision.

It’s easy to say now that Alvarado, who has had his share of out-of-the-ring troubles and doesn’t always lead a Spartan lifestyle, gave whatever he had left in his battle-worn body in the 12 rounds he went with Marquez, that there was nothing left to give against Rios.

However, another way to look at it is that he was simply overwhelmed by the far-better fighter. There were questions if Rios would ever recapture the destructive world-class form he had during his lightweight title reign. He was outclassed by Manny Pacquiao after his rematch loss to Alvarado and then looked flat while struggling to a ninth-round disqualification win against Diego Chaves. There was talk of Rios retiring if he lost the rubber match to Alvarado.

“I had to come well prepared,” Rios told HBO’s Jim Lampley after the bout. “It could have been the last fight for me.”

However, the 28-year-old banger answered his critics in emphatic fashion in Bloomfield.

Rios fought with the most focus, passion and purpose that fans have seen from him since his first fight with Alvarado. He took the fight to his rival from the opening bell, establishing his jab immediately, nailing Alvarado with accurate right hands from mid-range before moving in close, where he did his most extensive damage.

Rios’ infighting technique was as sharp and punishing as it was when he was brutalizing 135 pounders. And despite fighting at welterweight, Rios fought at a lightweight’s pace. The speed, relentless pressure, volume punching and accurate inside combinations prevented Alvarado from ever getting started. Alvarado only managed to land 20 of 87 total punches in three rounds, according to CompuBox. Rios landed 120 of 290 punches, including way too many uppercuts for poor Alvarado’s neurological health.

“I think I have the deadliest uppercuts in the world,” Rios said during his post-fight interview.

It will be interesting to see if Rios can use those vaunted uppercuts, along with the rest of his battle-tested arsenal, against bona-fide welterweight contenders. He won the WBO’s “international” title against Alvarado, which will push him up that sanctioning body’s 147-pound rankings.

Pacquiao is the WBO welterweight titleholder. We’ve seen that fight. However, the WBO’s Nos. 1 and 2 contenders are Marquez and Tim Bradley. We haven’t seen those fights – and they could be very, very good ones.

Marquez is at his best – and his most entertaining – when he’s taking on aggressive young fighters. And though Bradley is at his best when he’s boxing, he’s a man who subscribes to both the Sweet and Savage sciences. He can be pulled into a rough fight, as his fight of the year with Provodnikov and recent draw with Chaves proved.

Marquez and Bradley are promoted by Top Rank, as Rios is, which makes those potential bouts even more of a possibility. Whoever Rios takes on next, fans will be watching and they will give him his due respect going into those bouts.

The same can’t be said about Alvarado, unfortunately. The boxing media and hardcore fans are a hard lot, and they can be mean and dismissive when a fighter fails – or worse, fails to perform, as Alvarado did against Rios.

However, here’s hoping the back-to-back battles that thrilled fans, and also may have soaked up his prime, earn Alvarado his fair share of respect whether or not he decides to continue fighting.

Rather than lambaste Alvarado for what he wasn’t able to do against Rios in their third bout, they should thank him for what he did in their first two bouts and against the other contenders he’s faced.