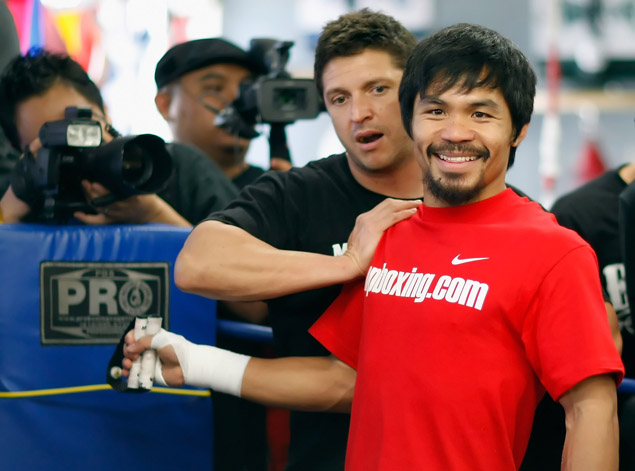 Manny Pacquiao’s former strength and conditioning coach, Alex Ariza, has never shied away from controversy. And his recent remarks regarding whether fight fans will ever get to see Manny Pacquiao vs. Floyd Mayweather Jr. – whether you believe him or not – are sure to stir the ever bubbling cauldron of skepticism surrounding the dream fight that has yet to materialize.

At the Los Angeles premiere of the Manny Pacquiao documentary titled “Manny,” Ariza spoke out about the potential fight and placed the blame squarely on the shoulders of Pacquiao’s promoter, Bob Arum, for the fight not taking place.

“It’s not going to happen,” Ariza said on the red carpet about Mayweather-Pacquiao clash. “Let’s not kid ourselvesÔÇª It’s really disrespectful to parade Manny through all of these trivial interviews with radio sites to sit there and call out Mayweather. It’s sad, deceptive and straight lying what Bob Arum is doing. To me it’s revolting that the fans have to get their hopes up for something that doesn’t exist.”

Ariza went on to state that Arum is under contract with The Venetian Macao in Macau, China for four more fights and is unwilling to risk Pacquiao losing and hurting business overseas. He also went on to mention that Pacquiao’s next fight would be against Jessie Vargas.

Ariza, who was fired by Pacquiao two years ago, has been close to Mayweather, which certainly clouds his comments in a fog of bias. Interestingly enough, Ariza can be seen in the “Manny” documentary during his tenure with Team Pacquiao and remained highly critical of Arum at that time as well. Whether or not Ariza’s comments are valid remains to be seen but he has made it very clear that no matter what Pacquiao wants, Arum will ignore him to protect his own financial interests.

“You have to go back and look at history,” Ariza continued. “Oscar De La Hoya had to get away from Bob Arum to get the big fights. You look at Miguel Cotto and Floyd Mayweather. Now you’re looking at Julio Cesar Chavez Jr. and Mikey Garcia. You have to look at the history of (Arum) who is known for not being honest or truthful.”

Arum addressed the situation on Thursday with the media in the midst of promoting the third fight between Brandon Rios and Mike Alvarado and continued to blame Mayweather for avoiding the fight.

“Everybody involved wants this fight, just like the fans,” Arum said to The Denver Post while reiterating that Mayweather is the only roadblock. “We’ve signed off on every point. We’ve agreed to everything. But push comes to shove, there’s one guy to blame.”

When asked about Ariza and Mayweather’s comments that it is the Top Rank CEO that is the one holding up the fight, Arum simply fired back “Now they need to look for a scapegoat.”

With Canelo Alvarez reportedly locked into a May 2 fight with James Kirkland and the only thing that could possibly move Canelo off of the date is the Mayweather-Pacquiao showdown, both parties will have to move quickly to secure the date. Regardless of who is right and who is wrong, the only thing that matters to the fans is whether or not the fight gets made.

Just as the fans are exhausted from the years of political mudslinging, the journalists are just as fatigued with reporting it. We are all hopeful that this will soon come to an end.