Canelo Alvarez to James Kirkland: ‘Let’s do it’ 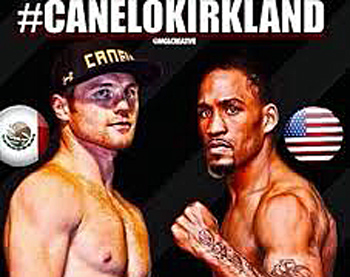 From the moment he broke the news on his own Twitter account — “Canelo vs. Kirkland is on” — Mexican junior middleweight star Canelo Alvarez reveled in the reaction to the fact that he will fight hard-hitting southpaw James Kirkland potentially in May.

“There are so many good responses by Twitter about the fight,” Alvarez told RingTV.com through Golden Boy Promotions PR director Ramiro Gonzalez. “That means there is a lot of interest. Let’s do it.”

According to some reports, the fight will take place on May 2 at the Alamodome in San Antonio but that’s not necessarily the case, said De La Hoya and Michael Miller, Kirkland’s manager. Although Miller is hoping the fight lands in San Antonio because Kirkland is from nearby Austin, the Thomas & Mack Center in Las Vegas is another consideration, according to some reports.

A unanimous decision victory by Alvarez over Austin Trout, whom he floored in the seventh round in April 2013, drew nearly 40,000 to the Alamodome.

Alvarez-Kirkland came to fruition in the wake of failed negotiations for a bout between RING middleweight champion Miguel Cotto and Alvarez, the No. 1-rated junior middleweight. However, the parties can’t commit to a date because Floyd Mayweather Jr. and Manny Pacquiao are in talks for a May 2 bout.

De La Hoya has said Canelo won’t fight on that date if Mayweather-Pacquiao is made, adding, “In the next few days we’ll know more details, but Canelo is fighting Kirkland.”

Kirkland, who turns 31 in March, is coming off a sixth-round knockout of previously unbeaten Glen Tapia in December 2013. That followed a 10th-round disqualification victory over former IBF beltholder Carlos Molina the previous March. Alvarez, 24, was last in action for a split-decision win over Erislandy Lara on July 12.

A sixth-round technical knockout of Angulo, which featured first round knockdowns by each fighter in November 2011, represented Kirkland’s third straight knockout win and Molina, his fourth consecutive victory since being dropped three times and knocked out in the first round by Nobuhiro Ishida in April 2011.

Before Lara, Alvarez had bracketed the win over Trout and a 10th-round TKO over Alfredo Angulo last March around a majority decision loss to Floyd Mayweather Jr. in September 2013.

Kirkland pulled out of a shot at Alvarez, then the WBC junior middleweight titleholder, in June 2012 after having agreed to replace Paul Williams following Williams’ career-ending injury from a motorcycle accident. Kirkland cited purse issues and later, his belief that he still had not fully recovered from shoulder surgery to repair tears in his right arm during the win over Molina.