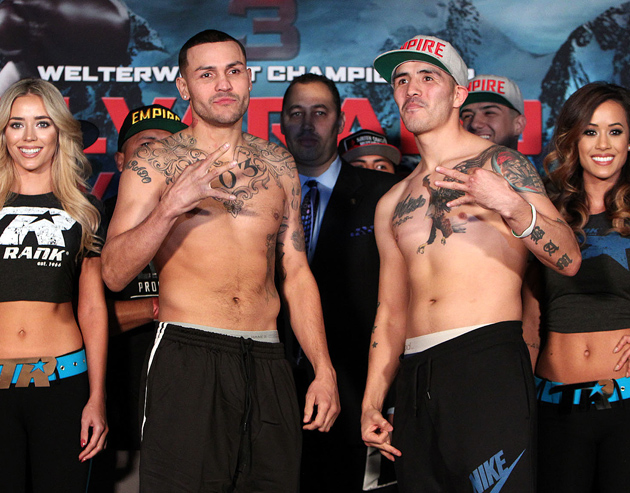 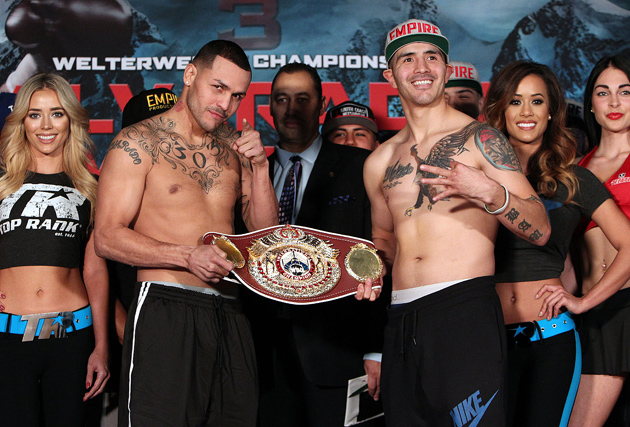 Welterweights Brandon Rios (32-2-1, 23 knockouts) and Mike Alvarado (34-3, 23 KOs) weighed 146.75 and 146.5 in advance of Saturday’s rubber match at the 1stBank Center in Broomfield, Colorado. The sluggers split their two prior bouts as junior welterweights.

A former lightweight titleholder, the 28-year-old Rios is 2-2 in his past four fights, and is coming off a ninth-round disqualification victory over Diego Chaves last August to bounce back from a unanimous-decision loss to Manny Pacquiao in his welterweight debut in November 2013.

Alvarado, 34, is 3-3 in his past six fights, starting with a bloody 10th-round knockout of Breidis Prescott in November 2011 that was followed by a unanimous decision over Mauricio Herrera in April 2012. Rios won the first meeting between the two, stopping Alvarado in the seventh round in October 2012 before losing the return bout by unanimous decision in March 2013.

After his second fight with Rios, Alvarado was dropped twice in the eighth of a 10th-round stoppage loss to Ruslan Provodnikov in October 2013 before swapping knockdowns with Juan Manuel Marquez en route to a unanimous-decision loss in his last fight last May.

A nearly 6-foot-3 body-punching southpaw whose idol is former champion Julio Cesar Chavez Sr., Ramirez, 24, is coming off an eighth-round technical knockout of Fulgencio Zuniga in November, representing his fourth consecutive stoppage. The 28-year-old Vlasov has won 11 consecutive fights, five by knockout, and is coming off a seventh-round stoppage of Ruben Eduardo Acosta in July.