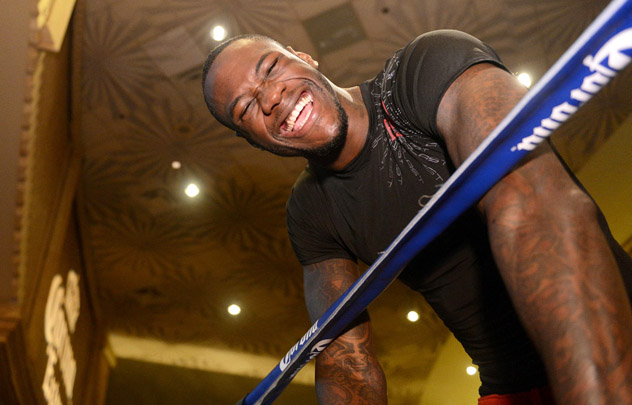 The city of Tuscaloosa, Ala. will host a parade and celebration Saturday starting at 2 p.m. for RING No. 2-ranked heavyweight Deontay Wilder, whose unanimous decision last weekend dethroned Bermane Stiverne as WBC titleholder, making Wilder America’s first heavyweight beltholder since Shannon Briggs in 2007.

“We like to call ourselves ‘The City of Champions.’ That’s a phrase that a lot of people in this city use,” said Deidre Stalnaker, communications’ director for the City Hall of Tuscaloosa. “We have our football teams and our gymnastics and our cheerleading squads and all of these great sports teams here. “But with boxing, this is something that is new for a lot of us. To have a world champion in our city, people are really loving it.”

Next to the 15-time NCAA champion University of Alabama, the towering 6-foot-7 Wilder (33-0, 32 knockouts) had been Tuscaloosa’s most popular sports figure and maintains a close relationship with the Crimson Tide football coach, Nick Saban.

“A lot of sports reporters followed his football career at Central High and then he was also good at basketball,” said Stalnaker of Wilder, who starred as a Central High School wide receiver and defensive end in football, at power forward in basketball, and had longed to be an athlete at the University of Alabama.

“Sports in general is such a big part of our culture and in our city, and people are really looking up to Deontay as a world champion. Deontay has always been a great athlete but he is also just so charismatic with that smile. You can not help but to smile when you see that smile. He is just such an inspiration. I was glued to the TV the entire time.”

Wilder was inspired in many different ways for his bout with Stiverne.

Wilder was told he was “special” and anointed” and “ordained” by his church-going, minster grandmother, Evelyn Loggins as a teenager and later promised his daughter, Naieya, born on March 20, 2005 with the congenital disorder spina bifida, that he would one day become a boxing champion. Thought by doctors at her birth that she might never walk, nine-year-old Naieya is mobile and athletic today.

It was about three years ago when late Hall of Fame trainer Emanuel Steward called Wilder “No. 1ÔÇªamong the American heavyweights,” also saying, “The best heavyweight prospect for winning the heavyweight title is Deontay Wilder.”

The former trainer of RING/IBF/WBA/WBO champion Wladimir Klitschko, Steward died at the age of 68 in October 2012 and Loggins at age 76 in 2010.

Adding even more symbolism to the situation was the fact that Wilder-Stiverne was scheduled for Jan. 17, marking the 73rd birthday of Muhammad Ali, and that the fight represented the first heavyweight title fight at the MGM since Evander Holyfield won back-to-back bouts over Mike Tyson by 11th round knockout in November of 1996 and by third round disqualification in the “bite fight” of June 1997.

“I know what it means to be the heavyweight champion of the world and I’m ready to take on the best of the best,” said Wilder, 29, whose also has a son, Dereon, 3, and another daughter, Ava, 4. “I’m ready to take full responsibility for what it means to be the heavyweight champion and I don’t see nobody in this division taking this away from me for a long time. I work super-hard and somebody is going to definitely have to be in shape if they’re talking about taking this.”

A 2008 Olympic bronze medalist, Wilder had hoped he would be joined in celebration by the University of Alabama before the Crimson Tide lost to Ohio State, 42-35, in the Jan. 3 semifinals of the inaugural College Football Playoff. Ohio State, in turn, lost the title game to Oregon.

Is Wilder still second to the Crimson Tide?

“I would say that today, he is first. Right now, he is definitely first,” said Stalnaker. “I don’t think that he is second to the University of Alabama at all.”

The parade will bring to a close what has been a frenetic week for Wilder.

“I’ve been doing so much throughout the week that I don’t know exactly who is coming, but I’m looking forward to seeing them all tomorrow. The family, the friends and other people from around the city and of course a lot of people are traveling in,” said Wilder.

Tuscaloosa Mayor Walter Maddox was traveling and unavailable for immediate comment, according to Stalnaker.