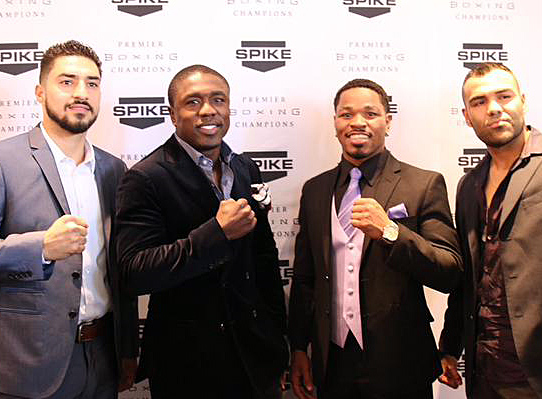 The monthly series will air on Fridays at 9:00 p.m. as part of a multi-year deal, an official with Haymon’s company informed RingTV.com on Thursday. The site of the first show has not been finalized but StubHub Center in Carson, California, is reportedly in the running.

“Groundbreaking is a good word for describing it. I’m excited. This is huge for boxing, and I’m so happy and thankful to be a part of it,” Lopez said during an interview with RingTV.com. “I’m ready to be setting off the fireworks with a big bang and with a tremendous fight like this. It just doesn’t get any better.”

The move comes on the heals of a Jan. 14 announcement of NBC’s new boxing series entitled, “Premier Boxing Champions” (“PBC on NBC”), part of a multi-year deal between Haymon and that network. The 20 show dates are scheduled through 2015 and will air on NBC Sports Network and NBC, with 11 episodes slated for the main network and nine scheduled for prime-time shows.

“With the PBC going on, and, now, with Spike TV, what can be better? To walk into a situation where I’m getting an opportunity to fight on Spike TV, you’re talking about something that is giving everyone worldwide entertainment,” said Porter. “This is an opportunity for me to showcase my skills at the highest level and on a great station that everyone is aware of and that everybody knows about, so I’m excited to be here.”

The initial NBC event will air on March 7 as a doubleheader, matching welterweight Keith Thurman against Robert Guerrero and junior welterweight Adrien Broner opposite John Molina from the MGM Grand in Las Vegas.

On April 11 in New York, likely at Barclays Center, NBC will air IBF junior welterweight beltlholder Lamont Peterson in a 143-pound non title catchweight bout opposite RING champion Danny Garcia, who also holds the WBA and WBC titles. Also reportedly in the works for the Garcia-Peterson card is a bout between WBO middleweight beltholder Andy Lee and former WBO beltholder Peter Quillin, according to ESPN.com.

“I think that this is awesome, getting us as athletes and fighters on a bigger platform. We have more of an opportunity to become household names. We’ve got an opportunity to be in 90 million or 100 million homes,” said Berto, who ended a 13-month ring absence with a unanimous decision over Steven Upshur Chambers on Sept. 6, the day before his 31st birthday.

“This is an opportunity to potentially emulate some of the legends from back in the day, like, the Sugar Ray Leonards and the Marvin Haglers and the Tommy Hearns’ and the Roberto Durans. When they got similar opportunities, you know, these guys became huge in their time. So we’ve definitely got the opportunity to do the same thing, now, so that’s why I believe that it’s a great situation.”

A two-time welterweight titlewinner, Berto (29-3, 22 knockouts) announced his return to full-time training from shoulder surgery on Aug. 7. Berto had surgery in August 2013 to repair a ruptured subscapularis (under the shoulder blade) tendon that he suffered during a 12th-round stoppage loss to Jesus Soto Karass in July 2013. The most recent surgery had followed a previous one to repair a ruptured left biceps in February 2012.

Berto believes that he suffered the injury in the second round of his loss to Soto Karass, and was found to have completely torn the tendon from top to bottom. The loss to Soto Karass was Berto’s first by knockout. His other setbacks were by unanimous decision to Victor Ortiz in April 2011 and to Guerrero in November of 2012.

“I’ve had my ups and downs and I’ve had my injuries, and I’ve been down, I’ve been knocked out,” said Berto. “But now, I’m in tremendous shape and I’m healthy, and this comes right on time. I’m ready to begin a new Berto era.”

The 30-year-old Lopez (33-6, 19 KOs) has won three straight fights, one by knockout, since falling by consecutive stoppages in the fifth and sixth rounds to Canelo Alvarez as a junior middleweight in September 2012 and Marcos Maidana as a welterweight in June 2013.

Lopez has sandwiched a fifth round technical knockout of Aaron Martinez in April 2014 between decisions over Mike Arnaoutis and Rafael Cobos in December 2013 and September. Cobos had gone 4-0-3 since being stopped in the seventh round by Humberto Mauro Gutierrez in May 2010

Prior to facing Alvarez in his 154-pound debut, Lopez had captured the hearts of many with a career-defining, ninth round stoppage over former welterweight titleholder Victor Ortiz in June 2012, breaking Ortiz’s jaw in the process.

“To me, this is another fight that I have to prepare for just like I do for every other fight. It’s a huge fight, and stylistically and matchup-wise, I’ve never been this excited for a fight in a long time,” said Lopez. “I’m thrilled to be going in there with Andre Berto, because I think that we’re going to give the fans who watch Spike TV on March 13 an exciting fight.”

The 27-year-old Porter (24-1-1, 15 KOs) lost his belt by majority decision to undefeated Kell Brook in August, having won it by fourth round technical knockout over two-division beltholder Paulie Malignaggi, whom Porter floored in the final round.

Prior to Malignaggi, Porter was coming off a title-winning unanimous decision over Devon Alexander in December 2013.

“When I lost my last fight, and I lost the title, obviously, I was down about losing fight. But I also looked at it like this: I didn’t get knocked down, and I didn’t get knocked out. I didn’t get outclassed,” said Porter. “I just simply lost the fight. So I didn’t get down on myself. Instead, I just told myself to keep my head in the sky, and to keep on praying, and I know that something good is still going to be out there for me. Most guys think that if you lose a fight, then your career is over. Obviously, this is not the case.”

In his last fight in July, Garcia (36-3, 23 KOs) rose from a ninth-round knockdown to secure a unanimous decision over Breidis Prescott, representing his eighth consecutive victory since falling by unanimous decision to former titleholder Antonio Margarito in a junior middleweight bout in May 2010.

“This guy is good, and he’s beaten some guys, so he’s not a cupcake. He’s a solid opponent. This is great for the sport of boxing, and this is exactly what we needed to bring boxing back on international television and into the main stream. It’s great to be part of this,” said Garcia, a married father of two girls.

“To be in this type of a fight with this kind of exposure that we’ve always hoped for and worked for. We’re just very grateful to have this opportunity. I’ve been happily married for eight years now, and have two baby girls. So all I’ve ever wanted was a chance to compete at an elite level, because this is the kind of fight that can change things for me and my family.”