Despite legal issues, Alvarado is ‘totally focused’ on Rios 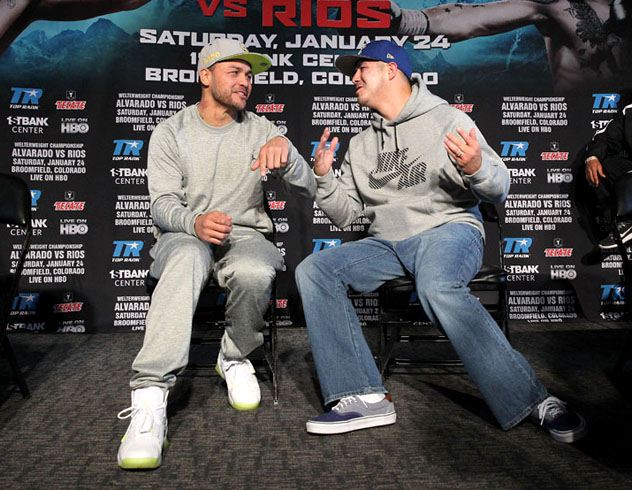 The first question posed to Mike Alvarado was about the “elephant in the room,” referring to the weapons charge he received after being arrested at 4 a.m. on Jan. 3.

Alvarado (34-3, 23 knockouts), 34, will face ring rival Brandon Rios (32-2-1, 23 KOs) in a welterweight bout on Saturday at the 1stBank Center in Broomfield, Colorado, their HBO-televised fight representing what promises to be a third brutal meeting in 27 months.

Alvarado, who is scheduled to appear in court on Feb. 25 for a previous offense, according to The Denver Post, addressed his checkered past, yet again, during a national conference call with media members on Wednesday.

“There have been no distractions. I am used to something always going wrong in camp,” said Alvarado, a former junior welterweight titleholder who has split 140-pound fights against Rios.

“When it is going too good and perfect, I know something bad is going to happen because that’s the way it has always been. I have been dealing with adversity my whole life. Adversity has been in my life the whole time so there are no distractions for this fight.”

Alvarado was arrested in his native Denver after police allegedly found a handgun in the glove compartment of his Hummer during a traffic stop. He was released from custody on a $3,500 bond.

Alvarado cannot legally possess a gun because he’s a convicted felon. He was also booked on a felony warrant in a neighboring county on the same allegation, illegal possession of a weapon. Alvarado posted a $41,500 bond and was released.

“I didn’t miss any training time. I went to jail for one day and I just made up for that day on that Sunday…I have grown so much from all of these learning experiences. I put them behind me. I don’t hold on to them,” said Alvarado.

“I don’t bring them with me into the ring and it’s not a distraction. I have learned to be positive through it and be strong and it gives me more confidence to be a better person and a better fighter. On Saturday night, it is on us to reach deep inside and make the adjustments that we need to make to overcome in this kind of fight.”

There are some who believe Alvarado to be a shot fighter as a result of his previous fights, a notion he adamantly denies.

“I know that those fights didn’t have any wear and tear on me, being in wars like that. I learned a lot since I started in this boxing game. It has been a learning experience as far as my technique and generalship in the ring and everything that goes along with it. Everything that happened in the ring makes me learn more about myself,” said Alvarado.

“Every situation and every moment in that ring has been a learning experience and I have taken it all with me. I have grown over the past few years as a fighter and as a man inside and outside the ring. It is going to make me a better fighter in the ring. It is on me to make those adjustments and utilize them in that ring.”

A former lightweight titleholder, Alvarado is also a father of three.

“My oldest daughter will be going into the ring with me,” said Alvarado, “and my other daughters will be there as well. I have three girls and they are my No. 1 fans.”