Daniel Estrada to be trained by Nacho Beristain against Kevin Mitchell 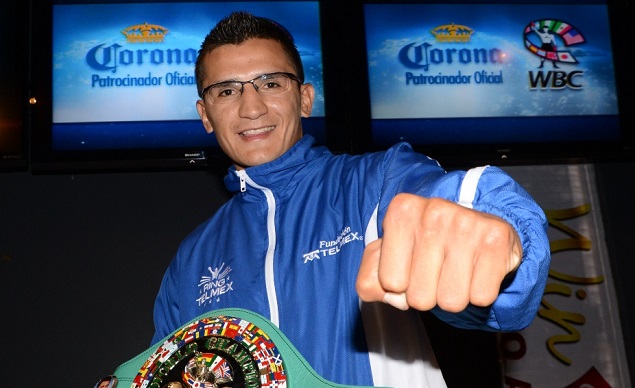 Lightweight Daniel Estrada will be trained by Nacho Beristain and supported by former four-division titlist Juan Manuel Marquez during his Jan. 31 bout against British contender Kevin Mitchell at the O2 Arena in London, according to a release from Eddie Hearn of Matchroom Sport.

The card originally included heavyweight Anthony Joshua, a 2012 Olympic gold medalist for Great Britain, before he suffered a back injury that forced him to pull out of a clash with former title challenger Kevin Johnson.

Mitchell (38-2, 28 knockouts) will be after his sixth straight victory in a run that has included four consecutive knockouts, the last coming by 11th-round stoppage over previously unbeaten Ghislain Maduma in May.

The 29-year-old Estrada (32-3-1, 24 KOs) was last in the ring for a ninth-round knockout loss to then-WBC titleholder Omar Figueroa Jr. in August, ending a nine-fight winning streak that had included five knockouts. Marquez is ranked No. 5 among welterweights by THE RING.

“Working alongside Marquez and the rest of his team will help me do something different in the fight. I’ve been doing my running in some mountains near Mexico City called Nevado de Toluca. It’s the first time I’ve worked with Beristain,” said Estrada.

“But we’re getting on well and I feel in great shape for this fight. I’m in the best shape of my life. I have lots of experience and I’ve had difficult opponents, even if Mitchell has had more fights than me. I feel this fight is at the right time for me.”

In the wake of the injured Figueroa being stripped and declared a “champion in recess” by the WBC, former featherweight and junior lightweight titleholder Jorge Linares knocked out Javier Prieto for the vacant 135-pound belt last month. Mitchell, 30, wants a shot at Linares should he get beyond Estrada, who has other ideas.

“I think that in a fight, the only thing that matters are the two boxers in the ring. If people chant things at me, I don’t care. It doesn’t intimidate me. I know what I have to do in the ring and I’m not scared of fighting in his hometown in front of his fans. We know that we need to take the fight to him,” said Estrada.

“That’s my plan: Look for the knockout. I don’t want to leave it in the hands of the judges. I’ve had the chance to fight for this silver [WBC] title before but I couldn’t win it. I like fighting for titles and I want another world title chance. I accept that Omar Figueroa beat me. I recognize my defeat and I have no excuses. I just want to get another chance.”

Also on the card is a battle of junior welterweights between John Wayne Hibbert and Tyler Goodjohn, as well as lightweights Tommy Martin and Ricky Boylan.