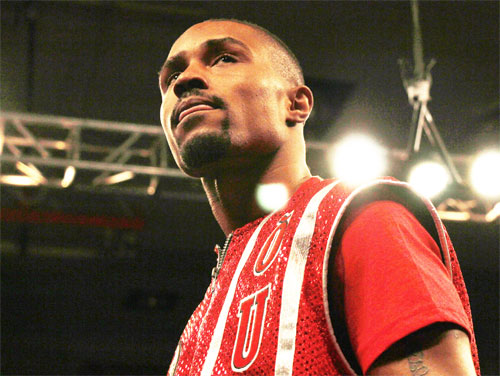 Junior lightweight Eric Hunter will face Nicaragua’s Rene Alvarado on Tuesday at the 2300 Arena in Philadelphia, the hometown of both Hunter and Hall-of-Famer Bernard Hopkins, who will represent Golden Boy Promotions five days after having celebrated his 50th birthday.

Hunter (19-3, 10 knockouts) and Alvarado (21-3, 14 KOs) headline a “Golden Boy Live!” show to be televised on FOX Sports 1 and FOX Deportes. Other bouts on the Hunter-Alvarado card include junior welterweight Michael Perez against Miguel Acosta and 130-pounder Lamont Roach Jr. opposite Herbert Quartey.

“I love fighting in front of my fans. It’s going to be a lot of fun. I don’t know too much about my opponent but I do know that he is going to come to fight,” said Hunter, 28. “I just need to win and to continue to do my thing. If I beat him real good, then everything else comes after that. The fans want to see a knockout but if I don’t get a knockout, I want to win all 10 rounds.”

Hunter’s setbacks were by split decision to Carlos Vinan in his sixth fight in January 2007 and by disqualification in the eighth round to Luis Franco in December 2010 and in the first round to Mike Oliver in September 2013.

“When you see three losses, that hurts. That hurts a lot,” said Hunter, 28. “It still hurts when you see my record.”

Although Hunter dismisses the shortcoming against Vinan as a “fight that I won but they gave me the loss,” he acknowledges that Franco “is one that I lost legitimately because he was beating me.”

“I had taken it on short notice and that night, he was the better man,” said Hunter, who was disqualified for repeated low blows against Franco. “I was mentally drained in that fight. So, yeah, that guy beat me. I can’t blame that on anybody but myself.”

Oliver is a different story.

“It wasn’t my fault at all,” said Hunter, who was disqualified for hitting Oliver on the break. “Nobody was there to break me. They just blamed me for something that he did wrong and now, I have a loss. No fight is going to make me forget about that loss, especially a fight that I really didn’t lose.”

“My main target is Rene Alvarado right now and I don’t know what to expect, so I can’t really speak on what’s next after this fight until I beat Alvarado,” said Hunter. “I just have to stay focused and keep winning, even though that [Oliver] loss still is in the back of my head. It has to be a motivator. I go back to the drawing board and I have to beat everyone in my weight from now on.”