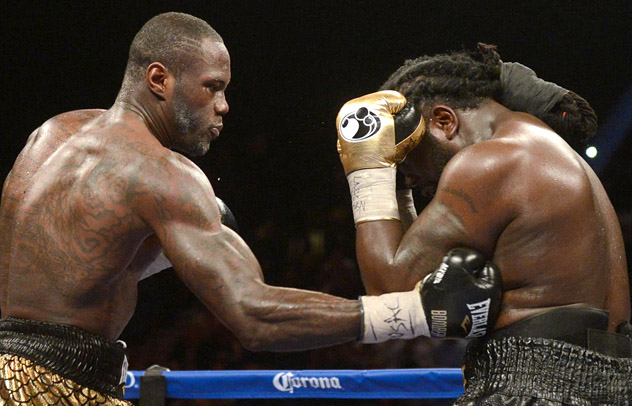 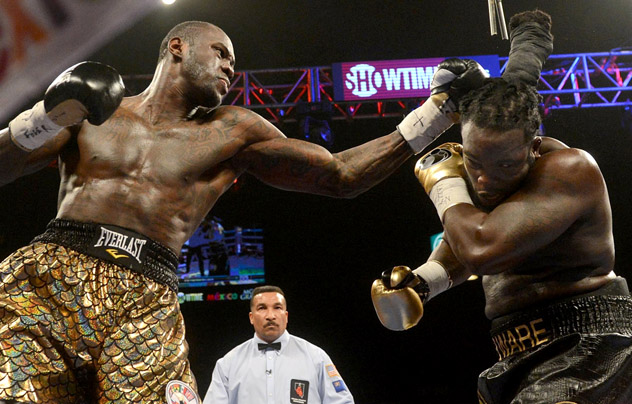 Deontay Wilder looked as if “he’s going to be one of the top champions for the next three or four years” to George Foreman, and Evander Holyfield “would give him a 7 on a scale of 1-to-10” for Saturday’s unanimous-decision victory that dethroned Bermane Stiverne as WBC heavyweight titleholder at the MGM Grand in Las Vegas.

“That’s really making a statement, and I like that idea,” said Foreman. “They had a piece on the Showtime broadcast where they mentioned the greatness of Muhammad Ali, and at the same time, we get Deontay Wilder winning a heavyweight championship. That makes it a really beautiful accomplishment, doesn’t it? That was certainly something that I needed to see.”

A 2008 Olympic bronze medalist who had not previously gone beyond four rounds, the 29-year-old Wilder (33-0, 32 knockouts) became the first American to be a division titleholder since Shannon Briggs in 2007 by delivering a near-shutout performance against the 36-year-old Stiverne (24-2-1, 21 KOs), who had been the division’s first titleholder of Haitian descent.

“The good thing about it is that Deontay Wilder had been a puncher with all of those knockouts, and yet he was disciplined to do what he had to do and to box last night. That surprised me,” said Foreman, who had picked Wilder to defeat Stiverne by third-round knockout as one of THE RING’s panel of 36 boxing insiders, which ended in an 18-to-18 draw.

“Deontay boxed, kept his composure and he understood that, ‘Look, I have as much ability to go the distance and to win this fight by a decision as any other person.’ So he’s just on a roll. I think that he’s going to be one of the top champions for the next three or four years. He’s dangerous with his punches, and now he’s got enough experience to realize that he can box.” 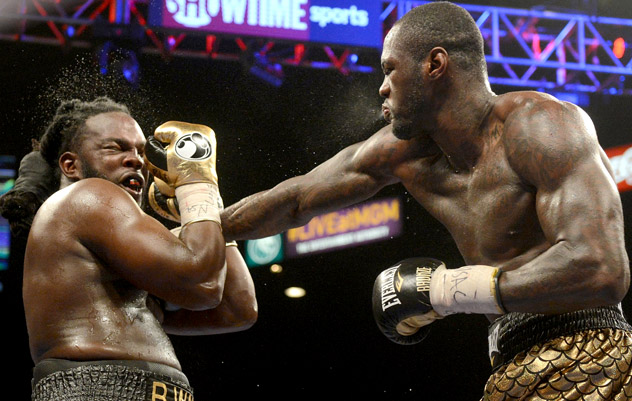 “Of course he has a lot of potential. I would give him a 7 on a scale of 1-to-10,” said Holyfield. “Now he can say, ‘I’ve been 12 rounds,’ and his confidence will only get better. I think this is what you’re supposed to do if you are the heavyweight champion. I would like to see him get better.”

One observation made by Holyfield was the fact that Wilder failed to finish Stiverne in the second round.

“If you looking at this fight, and you wanted to help him, the one thing that I would say is that if you get somebody hurt, don’t smother yourself, because he smothered himself when he got too close. You could tell that he wanted to close that gap too quickly,” said Holyfield of Wilder, who stood 6-foot-7 compared to 6-2 for Stiverne.

“It’s like he forgot that he has such long legs, so when he closed that gap so quickly, he got too close to the guy. He needs to learn how to close that distance, properly and not get hit. He scared me sometimes when he dropped his hands so low at times. But I still see the great potential.”

Holyfield also picked up on the fact that Wilder injured his right hand “in the third or fourth round” of the fight, according to Wilder.

“It looked like he hurt his had a little bit, because he kept hitting the guy on the forehead,” said Holyfield. “You can’t break nobody’s forehead. You’ll break your hand before you break his forehead. That’s the hardest part of your body.”

There were some who considered Wilder to be too light as a heavyweight. Wilder weighed 219 to Stiverne’s 239, which the former champions saw as an advantage. Holyfield, for example, weighed 208 when he knocked out a 246-pound Buster Douglass, and Foreman, 220 pounds when he lost to a 216.5-pound Muhammad Ali.

“My weight was generally between 217 and 224, but I would dry out to get that. After I would eat, I would go up to about 225 pounds,” said the nearly 6-4 Foreman, who nevertheless weighted 250-pounds in November 1994 when his 10th-round knockout of Michael Moorer made him the oldest man to win a heavyweight championship at the age of 45.

“I think that Deontay is just fine the way that he is, being as tall as he is and not having big legs. The thing about Muhammad Ali, if you watched him, he wasn’t that tall. Maybe 6-3 or so. But the bottom of Muhammad Ali’s thighs, ankles and calves were really big. He had a real thick ankle and a real thick neck. That’s something that people couldn’t necessarily see. Deontay doesn’t have big legs, so if he continues to train hard and improve, his weight is the best right where it is.”

Wilder-Stiverne represented the first heavyweight title fight at the MGM since Holyfield won back-to-back bouts over Mike Tyson by 11th round knockout in November of 1996 and by third-round disqualification in the “bite fight” of June ’97.

“When I heard them say that they haven’t had a heavyweight championship at The MGM since me and Mike Tyson were there, I’m like, ‘Wow, that’s a long time,'” said Holyfield, who unanimously decisioned Foreman in April 1991. “So to be there and to see us get one, that was kind of stunning. As an ambassador to the sport, I want to do my part. So I don’t mind helping him out.”

At age 27, Wilder was serving as the primary sparring partner for RING heavyweight champion Wladimir Klitschko in advance of the unified champion’s unanimous decision victory over Mariusz Wach in November 2012.

That is a fight that Wilder ÔÇö who called out Klitschko after beating Stiverne – expects Klitschko to win.

“I don’t think that’s the right fight for him, right now. I think that he should let the contenders come to him for a while and let Klitschko come to him. He can only get better as Klitschko starts to decline,” said Foreman. Klitschko turns 39 in March.

Wilder appears to be receptive to the wisdom of his predecessors.

“I can always learn. That’s why I’m in this sport,” said Wilder. “I feel like once I stop learning, then I don’t need to be in it anymore. I just want to keep learning and learning.”