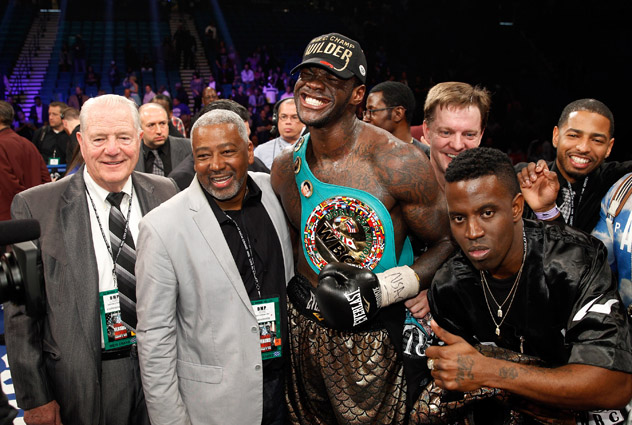 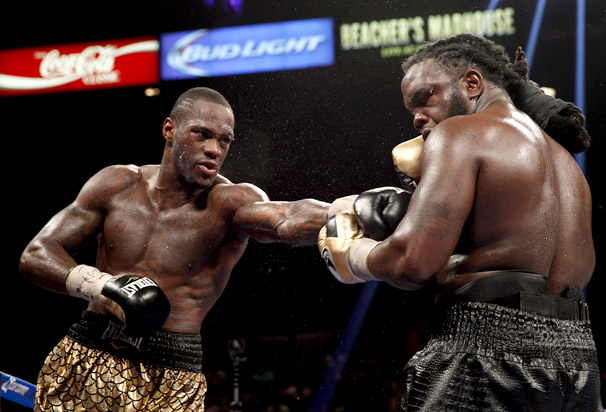 LAS VEGAS – Deontay Wilder’s amazing streak of knockouts came to an end against Bermane Stiverne on Saturday night at the MGM Grand. And he couldn’t be happier about it.

A fight that everyone thought would end in a knockout instead became a one-sided boxing lesson, as Wilder used a punishing jab, more than enough hard rights and superior athleticism to beat the WBC titleholder by scores of 120-107, 118-109 and 119-108. THE RING had it 116-112.

Thus, Wilder did what so many Americans have tried but failed to in recent years: win a major heavyweight title. No American had worn a belt since Shannon Briggs in 2007.

The accomplishment wasn’t lost on the fans at the MGM Grand Garden Arena, who chanted USA! USA! USA! several times during the fight even if they also booed at times because they craved greater action.

“I’m so excited and happy to bring the belt back to America officially,” he said in the ring. “It means a lot. I answered a lot of questions tonight.”

Wilder (33-0, 32 knockouts) stung Stiverne a few times with his feared right hand but, to the surprise of anyone who has followed their careers, neither fighter was hurt seriously. Perhaps more surprising was Wilder’s ability to dominate a more experienced opponent with his boxing skills.

The 6-foot-7 Alabamian was thought to be in the process of developing as a boxer for a relative lack of experience. He started boxing in 2005, somehow won a bronze medal in the 2008 Olympics and has learned on the go as a pro.

He didn’t look like a neophyte on Saturday. Wilder kept his 6-foot-2 opponent at a distance with a ridiculously long jab for almost the entire fight. And when Stiverne, who was aggressive at times, did get close, Wilder more often than not used his quick feet to scurry out of harm’s way.

And the punches that did slip through? Wilder took ’em like the champ he now is. He said he was never hurt, adding with a minimal amount of respect for the now-former champ: “My daughter hits harder.”

“Who can’t take a punch?” said Wilder, who then made a reference to the fact it was Muhammad Ali’s 73rd birthday on Saturday. “I’m still pretty. Happy birthday to Muhammad Ali. You’re my idol. I dedicate this to you.”

Wilder also had never gone past four rounds, a tribute to his punching power. And many wondered whether he could go into the late rounds. Turns out he could – easily. He said he could’ve gone 20.

And he wasn’t remotely disappointed that he was unable to put Stiverne down.

“After the fourth round, I didn’t care about the knockout,” he said. “I wanted to see the fifth round so I could show the world what I can do. I think I showed the world in great fashion.”

There wasn’t much Stiverne could say afterward.

The Haitian-Canadian looked like a beast in his last fight, a sixth-round knockout of capable Chris Arreola to win the title vacated by Vitali Klitschko in 2013. He emerged from that fight as the greatest threat to RING and universal champion Wladimir Klitschko.

On Saturday, he looked like just another in a pool of mediocre heavyweights.

“I wasn’t myself tonight,” he said. “I felt 100 percent mentally but I couldn’t cut the ring off like I usually do. I have to go back and look at the tape to see what my mistakes were. I was throwing hard punches but I could only throw two at a time.

“I wasn’t able to do what I wanted to do in the ring. I don’t want to take anything away from him, though. He fought a great fight.”

What now for Wilder?

The obvious and most lucrative matchup would be against Klitschko, who owns the other four major titles – RING, IBF, WBA and WBO. And Wilder said that fight will happen. He would prefer to face someone else in his next fight, though.

“[Klitschko] is definitely a fight I’m interested in,” he said. “I have another plan in a perfect world. If and when Klitschko eliminates my mandatory (Bryant Jennings, who is negotiating to fight Klitschko), I want to defend against Tyson Fury and then end the year with a unification bout against Klitschko.

“ÔÇª In my perfect world, that’s what I want to happen.”

It’s safe to say that Wilder’s world is feeling more or less perfect right about now.