Bermane Stiverne vs. Deontay Wilder is big but where will it lead? 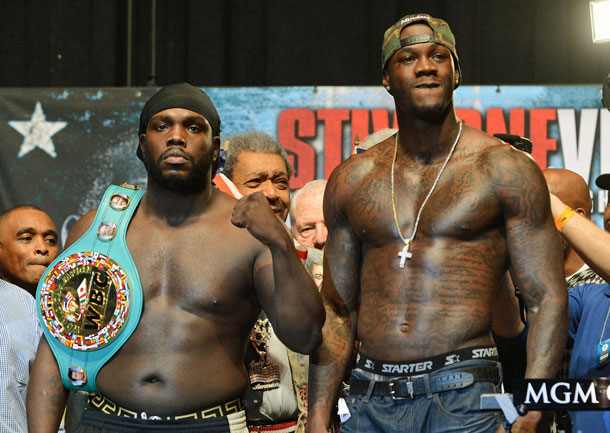 LAS VEGAS – Is the fight between WBC titleholder Bermane Stiverne and Deontay Wilder on Saturday at the MGM Grand the start of a new era in heavyweight boxing? Probably not.

The fight is big. It’s arguably the most significant heavyweight title matchup in the United States since the 1997 Evander Holyfield-Mike Tyson bite fight, which also happens to be the last championship match in the MGM Grand Garden Arena.

And if Wilder, a slight favorite, wins, he would become the first American to wear a major belt since Shannon Briggs in 2007. That’s important.

However, the division still belongs unequivocally to a giant Ukrainian named Wladimir Klitschko, who has collected three of the four major titles, as well as the RING championship, during a nearly nine-year reign and doesn’t appear to be going anywhere soon even as he approaches 39.

I and pretty much everyone else envisions this: Whoever wins the fight on Saturday takes on Klitschko, gets annihilated and then ends up as the true champion’s opponents generally do: as a footnote.

So much for the new era, right?

I don’t think it’s necessarily quite so bleak, though. The matchup on Saturday reminds me in some ways of the unforgettable 1985 fight between Marvin Hagler and Tommy Hearns, which Hagler won by a third-round knockout.

To be clear: I am not comparing Stiverne and Wilder to Hagler and Hearns in terms of ability; there IS no comparison. Their body types, styles and punching power – as well as their fighting spirits – are at least somewhat similar, though.

In other words, the principals are capable of giving the division something it needs badly: a thrilling brawl that ends with a knockout. Consider their combined record: 56-1-1, with 53 knockouts. That’s a mouth-watering KO percentage of 91.4, which seems to portend something special.

If we get a war to remember, the stock of both fighters could go up – at least in terms of marketability – and the division, which has produced so few classics in recent years, would get a shot in the arm.

I have to say here that a victory by Wilder would be better for the sport, certainly better in the United States.

That’s not to take anything away from Stiverne. If he emerges victorious on Saturday and then somehow beats Klitschko, then, hey, the soft-spoken native of Haiti would become the king of the boxing world.

I just think that Wilder has more of an upside as an attraction. The man is a compelling 6 feet 7 inches, maybe taller. The fans love giants. He has stopped all 32 of his opponents, which is significant regardless of opposition. And he’s engaging, something Stiverne is not.

If Wilder maintains his streak of knockouts, I can see the sporting public falling in love Wilder the knockout artist and Wilder the person, who also happens to have a good story. His devotion to his special-needs daughter is heartwarming.

Let’s say Wilder ends the fight with one of his hellacious rights, which isn’t difficult to imagine. Then, as an American champ, he will have enhanced his name recognition and built considerably more momentum.

Next, I can imagine the following scenario: Instead of going directly to Klitschko, where he would make the most money, Wilder fights Stiverne again if they give us a worthy battle or better yet pursues a fight with loquacious 6-foot-9 heavyweight Tyson Fury if the Englishman beats heavy underdog Christian Hammer on Feb. 28.

The latter would be an enormous fight in the U.K., one that could fill a stadium and make both fighters multimillionaires. A matchup of two undefeated behemoths who talk up a storm is simply a can’t-miss blockbuster.

The winner of that fight (probably Wilder) would emerge as an even bigger figure who would then make a matchup with Klitschko something resembling a superfight.

The result probably would be the same – a one-sided Klitschko victory – but it would be a fun ride. And who the hell knows? Maybe Wilder would catch Klitschko just right and we’d have the new era after all.