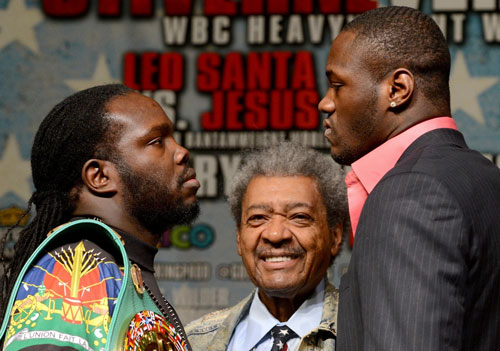 LAS VEGAS — WBC heavyweight titleholder Bermane Stiverne weighed in Friday at 239 for his defense against Deontay Wilder on Saturday at the MGM Grand. Wilder weighed 219.

Stiverne (24-1-1, 21 knockouts) won the vacant title by stopping Chris Arreola in six rounds in May. Wilder (32-0, 32 KOs) is trying to become the first American heavyweight to win a major belt since 2007.

Stiverne weighed 239.5 for the Arreola fight. Wilder weighed 224 for his last fight, against Jason Gavern in August.

The fight will be televised on Showtime.

Stiverne, the more experienced fighter but a slight betting underdog at some sports books, told Showtime’s Brian Custer that Wilder, who has stopped all 32 of his pro opponents before the fifth round, will be in too deep tomorrow night.

“The eyes don’t lie,” Stiverne said after the customary post-weigh-in staredown. “I can tell up in his eyes, he ain’t ready for this. Deontay ain’t gonna do squat. This will be the last time you hear from Deontay Wilder.”

“I feel the talking has been done, now it’s time to fight,” Wilder told Custer. “I’m going to beat him within an inch of his life. The soon-to-be-champ will be around for a long, long time.”

Leo Santa Cruz (28-0-1, 16 KOs), who defends his WBC junior featherweight title against Jesus Ruiz in the co-featured bout of the card, weighed in at 121.5. Ruiz weighed in at the division limit of 122 pounds.

Undefeated prospect Amir Imam (15-0, 13 KOs), who opens the Showtime broadcast against Fidel Maldonado Jr. (19-2, 16 KOs) in a scheduled 10-round junior welterweight bout, weighed in at the division limit of 140 pounds. Maldonado weigh in at 139.