Danny Garcia: ‘I’m ready to take boxing to another level’ 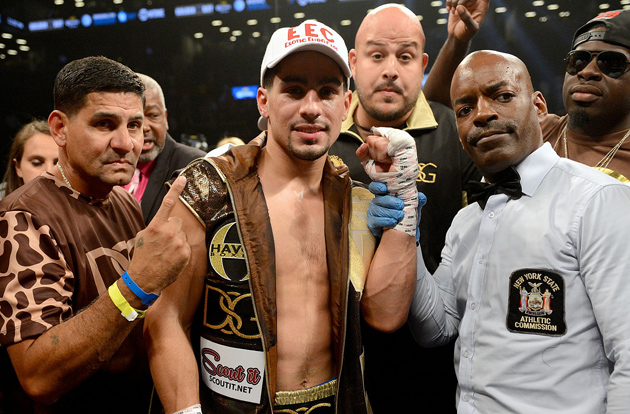 During the gathering, Hearns’ right hand rested on Garcia’s right shoulder. That same hand helped the five-division champion nicknamed “The Hitman,” to separate 48 stoppage victims from their senses, including Duran via devastating second-round, face-first knockout in June 1984.

“When I was up on the stage with all of those other champions, I was thinking that I’m cut from that same cloth,” said Garcia, 26, who also holds of the WBA and WBC belts. “That was just an amazing feeling.”

Garcia (29-0, 17 knockouts) shared his thoughts during a Wednesday press conference announcing his 143-pound catchweight bout against RING No. 3-rated IBF titleholder Peterson (33-2-1, 17 KOs) that is scheduled for April 11 potentially at Barclays Center in Brooklyn, N.Y.

Garcia-Peterson will mark the second event of NBC’s new boxing series titled, “Premier Boxing Champions” (“PBC on NBC”) as part of a multi-year deal between the network and adviser Al Haymon, who manages Garcia, Peterson and “about 150 fighters.”

The inaugural event will air on March 7 as a doubleheader matching Thurman, THE RING’s No. 7-rated welterweight, against No. 8-rated Guerrero, and Broner, the magazine’s No. 6-rated junior welterweight, opposite John Molina from the MGM Grand in Las Vegas.

“It felt great to be up on the stage with all of those men who actually opened up the door for fighters like us. So to be able to fight on NBC, it feels like you’re being a throwback to the old world,” said Garcia.

“One day, I may fight on other networks but this is just to make boxing bigger. This is for the world of boxing and the whole world is going to be seeing boxing. This a move that is going to draw fans and make good fights more available to everybody.”

Garcia and Peterson last showcased their talents by scoring knockouts on the same card in August at Barclays Center in Brooklyn. Garcia, of Philadelphia, registered a second-round stoppage of Rod Salka and Peterson, of Washington, D.C., easily handled Edgar Santana on the way to a 10th-round technical knockout.

“I’ve just got to go in there and be Danny Garcia because I know that if I just be myself, then nobody can beat me,” said Garcia, winner of a disputed majority decision over Mauricio Herrera last March before facing Salka. “I just need to go in there 100 percent focused and mentally ready and I’ll be able to handle my business just like I always do.”

“Styles make fights and Peterson is the perfect style for Danny because he’s going to try to run and he’s not a boxer. He’s never been a boxer,” said Angel Garcia, Danny’s father and trainer.

“Lamont Peterson doesn’t really know how to box, so he’s going to try to stand in there with Danny and that’s the way that it’s going to happen. The question is, can he take the shots that Danny Garcia is going to be hitting him with?”

Given that Garcia fought Salka at a 142-pound catchweight and has hinted at a rise into the welterweight division (potentially for a mega-bout with RING welterweight champion Floyd Mayweather Jr.), the relative size of the boxers on fight night could be a factor.

“Fighting at 142 for my last fight, I felt like I was stronger and my defense felt good and my hands felt tight in the gloves. That was just perfect for me. I just feel like it’s time for me to do better things in life. I feel like I’m always going to be the bigger fighter,” said Garcia.

“But that don’t matter, really, who is bigger in boxing. But this is a fight that the fans want to see, no matter what the weight is. I think that it’s going to be a great fight and I got something for [Peterson] coming on April 11. I’m going to show the world why I’m one of the best fighters in the world; mark my words.”

Mayweather, meanwhile, is involved in ongoing negotiations for a May 2 clash with RING No. 1-rated welterweight and WBO titlist Manny Pacquiao.

“The thing about Floyd is that Floyd fights whoever he wants to fight, so that’s up to Al Haymon and our management team. But the thing is, this is at a catchweight of 143, so it’s not going to be at 140 for the title or nothing like that,” said Angel Garcia.

“Imagine this: Danny’s been at 140 for about eight years. He don’t really struggle. I mean, everybody has to work to make the weight. It doesn’t matter. You’re still going to have to work. But this is going to be better for him because it’s been eight years. So it’s time and we’re going to take it from there and there is no looking back after that. He’s not old; he’s still young but this is a new chapter.”

Peterson’s non-title bout with Lucas Matthysse was contested at a 141-pound catchweight.

“I’m not sure who is going to be the bigger guy that night. I can put on a pretty good amount of weight by fight night and I’m pretty sure that [Garcia] can too. I don’t that will be the determining factor on who wins and who loses. We’ll come up with a game plan in the gym and if that calls for packing on some muscle and using that as a strategy, then I’ll do so,” said Peterson.

“But if I need to be lighter and more quick-footed, then I’ll do that. So we’ll seeÔÇªI’m pretty sure that he’s struggling to make 140 and, really, I am too. I make it pretty comfortably but it’s not an easy task. I think that we both do want to move up but this fight is in such a high demand that he’s willing to meet me halfway. So I respect him for that and, really, I thank him for it.”

The WBC’s mandatory challenger for Garcia is undefeated Russian Viktor Postol, who has accepted “a step-aside” agreement that permits Garcia to face Peterson in accordance with an agreement with Postol’s manager, Vadim Kornilov.

“I’m not going to say this is my last fight at 140 but I’m going to move up in weight slowly,” said Danny Garcia. “There may be one or two more in between and then I’ll go from there. I’m just going to be me in this fight and handle my business. I’m ready to take boxing to another level.”