Lamont Peterson to face Danny Garcia ‘at the perfect time’ 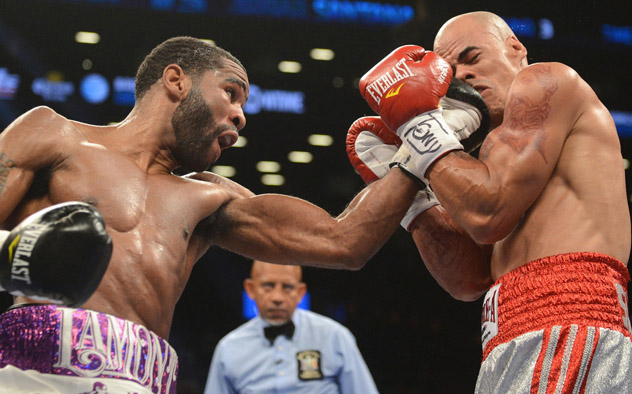 “I think that this is coming at the perfect time,” said Peterson, 30, who is 6-1-1 with four stoppage wins since December 2009, when he lost by unanimous decision to two-division titlist Tim Bradley as a 140-pounder.

Garcia-Peterson was announced during a Wednesday press conference as part of NBC’s new boxing series titled, “Premier Boxing Champions” (“PBC on NBC”) in accordance with a multi-year deal between the network and adviser Al Haymon.

The inaugural event will air at 9:00 p.m. ET on March 7 as a doubleheader, matching THE RING’s No. 7-rated welterweight Keith Thurman against No. 8-rated Robert Guerrero and the magazine’s No. 6-rated junior welterweight Adrien Broner opposite John Molina from the MGM Grand in Las Vegas.

“Like I said, it seems, yet again, like it’s the perfect time for this to be happening,” said Peterson, who appeared with the other fighters on a stage at the NBC studios alongside legendary Hall-of-Famers Sugar Ray Leonard, Thomas Hearns and Roberto Duran. “This is the perfect opportunity for all of the fighters that are here and I’m just happy and anxious and ready to get started.”

Garcia (29-0, 17 knockouts) and Peterson (33-2-1, 17 KOs) scored knockouts on the same card in their last fights in August at Barclays Center in Brooklyn.

Garcia, 26, of Philadelphia, scored a second-round stoppage of Rod Salka and Peterson, of Washington, D.C., beat Edgar Santana down en route to a 10th-round technical knockout.

In response to critics who discount Peterson’s chances due to his loss to Lucas Matthysse in May of 2013, the fighter and his trainer, Barry Hunter, raised the fact that Garcia struggled during a split decision win over Kendall Holt in October 2011.

“Styles make fights and if you want to match things up with other fighters, then [Garcia] had a split decision over Kendall Holt and I stopped [Holt] in the eighth round [in Feb. 2013],” said Peterson. “So you can’t really look at it that way. You never know what it’s going to be until you get into the ring.”

Given that Garcia fought Salka at a 142-pound catchweight and has hinted at a rise into the welterweight division, the relative size of the boxers on fight night could be a factor.

“I’m not sure who is going to be the bigger guy that night. I can put on a pretty good amount of weight by fight night and I’m pretty sure that he can too. I don’t that will be the determining factor on who wins and who loses. We’ll come up with a game plan in the gym and if that calls for packing on some muscle and using that as a strategy, then I’ll do so,” said Peterson.

“But if I need to be lighter and more quick-footed, then I’ll do that. So we’ll see…I’m pretty sure that he’s struggling to make 140 and, really, I am too. I make it pretty comfortably but it’s not an easy task. I think that we both do want to move up but this fight is in such a high demand that he’s willing to meet me halfway. So I respect him for that and, really, I thank him for it.”

The WBC’s mandatory challenger to Garcia is undefeated Russian Viktor Postol, who has accepted “a step-aside” agreement that permits Garcia to face Peterson in accordance with an agreement with Postol’s manager, Vadim Kornilov.

“Everyone looks at Garcia as the No. 1 guy in the division. He’s carrying most of the belts and he’s THE RING magazine champion. So we’re two of the top guys in the division and this is a fight that really means something to the weight class, with or without the belts,” said Peterson.

“Of course I will be the underdog in a lot of people’s eyes but there are people who understand boxing and who understand my style against his style and they know that regardless of win, lose or draw, this is going to be a good fight. We’ll see what the outcome is.”